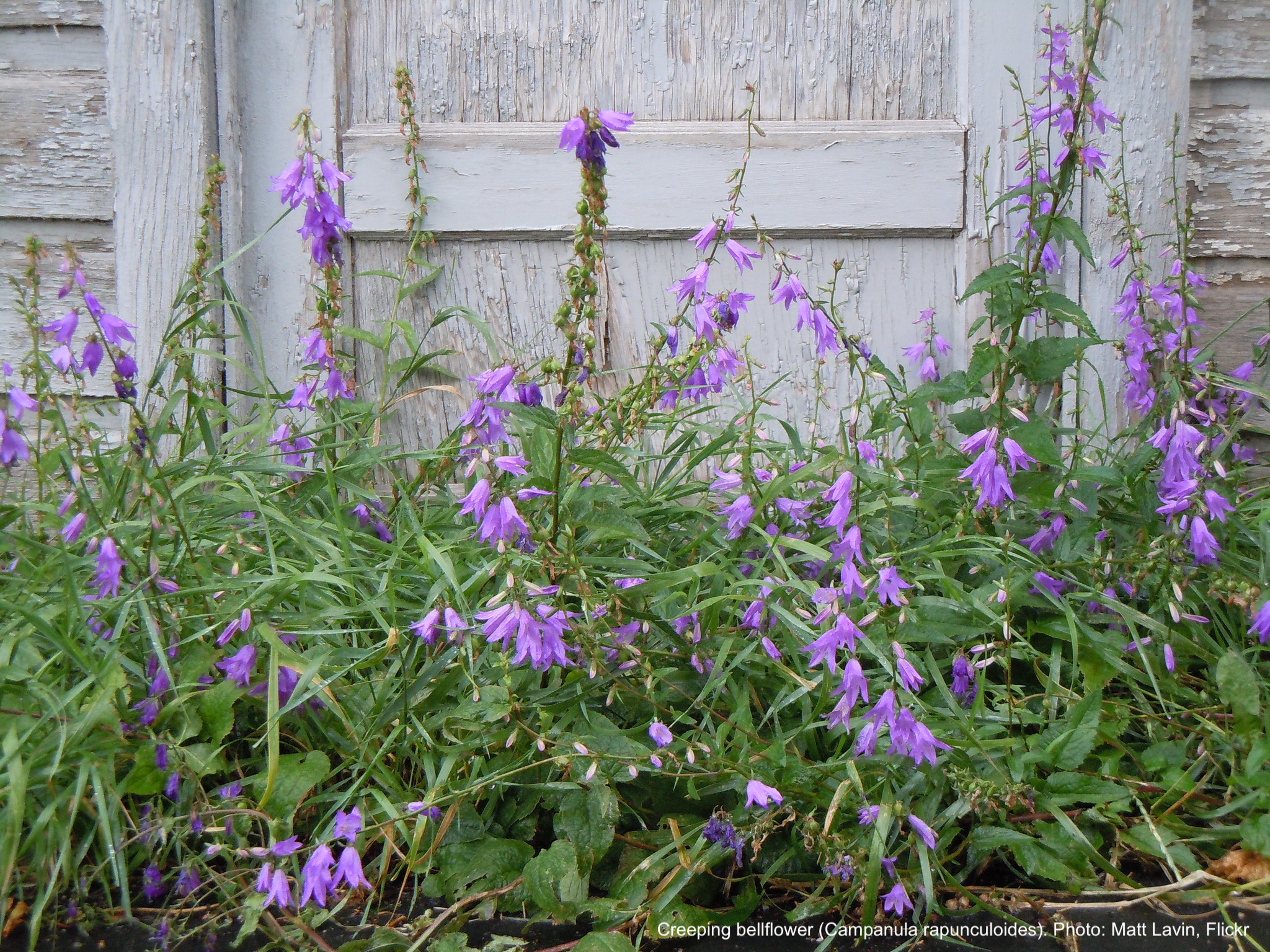 Only one is a true weed, though: creeping bellflower (C. rapunculoides). And, like any true weed, you probably didn’t plant it: it likely showed up all on its own.

A lot of gardeners are pleased to see it at first: after all, creeping bellflower produces lovely stalks of dangling blue-violet bells: What’s not to like about that? But you soon find it spreads like crazy, sometimes through seed, but mostly through creeping underground rhizomes, choking out your other garden plants. And it doesn’t bloom all that densely, either. You find yourself with a carpet of creeping youngsters with only a few mature, flowering plants spotted here and there.

Creeping bellflower, it would appear, is hellbent on taking over the entire world!

Creeping bellflower is native to temperate regions of Europe and Western Asia. It was introduced to North America in colonial times, either as a garden ornamental or a vegetable (the tuberous root is edible, as are the flowers and young shoots and leaves, and have a long history of use as a famine food). It has since escaped and become well established throughout Canada and all but the southernmost parts of the USA. It has also invaded New Zealand, Japan and parts of South America, Africa and Australia. In many areas, it’s considered a noxious weed and growing it may be illegal.

Campanula means a small bell. Rapunculoides means like a rampion bellflower (C. rapunculus), also called rapunzel, a related biennial species with similar although upright flowers that was once grown as a vegetable for its edible leaves and parsniplike root. And, yes, you did read correctly. That’s Rapunzel as in the Brother Grimm’s fairy tale.

That’s a problem! There are several bellflowers and bellflower relatives (like Adenophora spp.) that look a lot like it. So, here are the details:

(Do note that the tubers are not found directly under the mother plant as you would think, but appear here and there on creeping rhizomes, up to 1 foot/30 cm or more away.)

There is no easy solution to getting rid of creeping bellflower. Here are some thoughts on its control.

Helpful Hint: The only part of creeping bellflower you should put in the compost pile is its leaves: roots, tubers and seeds can survive composting and come back to haunt you.

Creeping bellflower: I hope you don’t have this plant in your garden, but if you do and want to control it, you’ll have to expect to put in quite a bit of effort!

10 comments on “The Weedy Bellflower”