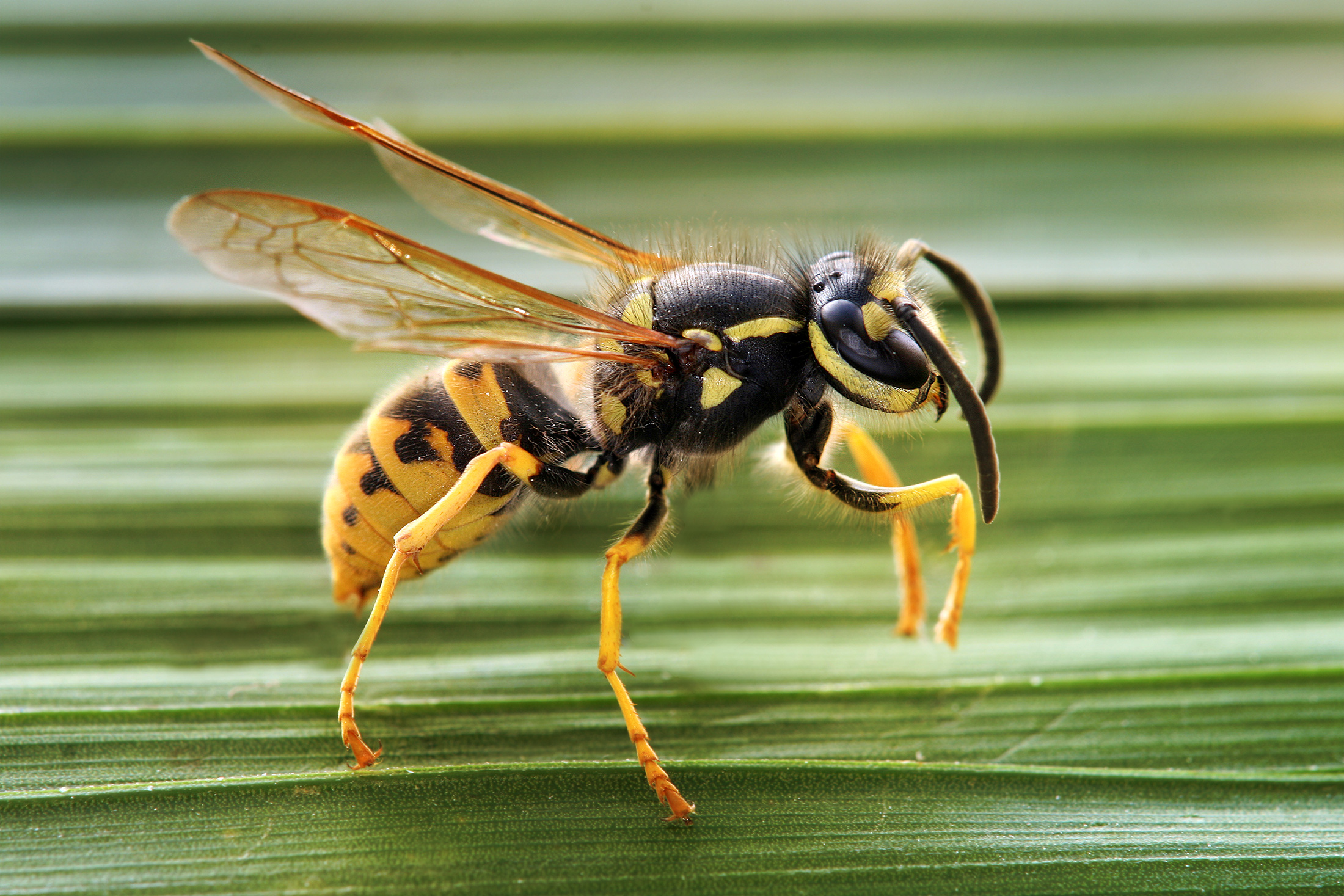 Social wasps (the ones that live in colonies) are usually striped yellow and black or white and black, a visual warning that says “Stay away, I’m aggressive.” Photo: Richard Bartz, Wikimedia Commons

If you get the impression you’re seeing more social wasps (yellow jackets, paper wasps and hornets) in your garden as the summer advances, you’re absolutely right. The population of wasps in a colony starts small in the spring, keeps increasing throughout the summer and reaches its peak in the early fall. But there’s no need to panic: the population will drop to zero soon enough, because the whole colony will collapse with the first hard frost… or, in mild climates, soon after days start to shorten.

What many gardeners don’t understand about wasp nests is that they are not permanent, but rather annual structures. Each spring, with the return of warmer temperatures, a young queen, who had overwintered in the ground or under the bark of a tree, selects a site and begins to build a new nest. She starts to lay eggs and to care for the young herself. But as worker wasps mature, they take her place, enlarging the nest, hunting for food, and feeding the larvae while the queen specializes in laying eggs.

All this time, the number of worker wasps increases. At the end of the season, one or more new queens leave the nest, mate with a male wasp, and look for a place to spend the winter. The old colony comes to a halt and the original queen and the workers die. The following spring, the cycle begins again.

Do note that the old nest, now abandoned, will not be used again.

What to Do When You Find a Wasp Nest?

The best (and safest) thing to do when you spot a wasp nest is … nothing, unless the nest is in a place where it’s a risk to humans, pets or farm animals.

You see, wasps are actually beneficial insects. They are essentially predators and consume a lot of insect pests: aphids, caterpillars, beetles, whiteflies, etc. They also collect and remove dead insects. Plus, they pollinate many plants. Recently it was discovered that it’s social wasps that carry yeast spores to grapes that eventually cause them to ferment: without wasps, there would be no wine! If it weren’t for their aggressive nature, wasps would certainly be among the gardener’s best friends!

Sadly for the reputation of social wasps, though, they are quite aggressive and will sting humans who disturb them, especially when you approach their nests. And since, unlike bees, each wasp can sting more than once, you won’t want to accidentally mow down a wasp nest with your lawnmower!

Read Friend or Foe: A Closer Look at Insects if you’re not sure how to tell a wasp from a bee.

When Wasps Disturb Your Meal

Wasps like human food, especially sugary food, so often come investigate when we eat outdoors … especially in the late summer and fall when they are then particularly numerous. Since many people are afraid of wasps, that can make for a stressful snack!

The easiest thing to do in such a case is to attract the wasps elsewhere while you eat. Place a small plate of sweet fruit outdoors about 15 to 20 minutes before the meal … and at least 10 feet (3 m) from your table. Wasps will discover your “wasp buffet” first and will be too busy with it to bother you.

There are also commercial wasp traps containing a sugary liquid that can also be installed temporarily, again 15 to 20 minutes before a meal at a respectable distance from your table. They are so designed that worker wasps enter the trap looking for a meal, then can’t get out and eventually die.

You can also make your own wasp trap by cutting the top off a soft drink bottle, inverting it so it acts like a funnel, adding sugary liquid, jam or sweet fruit to the bottom and putting it out where wasps can see it. They’ll find their way in, but not their way out.

Helpful Hint: Don’t leave this kind of trap out permanently, as the wasps end up dead and, since wasps really are actually more beneficial than harmful, they should be left alive where possible.

Note that the wasp traps described above (the kind the wasps enter and can’t get out of) will not eliminate a wasp colony. All they do is trap worker wasps and the queen will just lay more eggs to replace them. To destroy a wasp nest and therefore remove all risks to humans, you have to eliminate the queen, not the workers.

When the Nest Is in the Wrong Place

When you discover a wasp nest on your lot (and it can be, among others, underground, in a hole in a wall, in a wood pile or compost bin, inside a tree trunk, exposed on a branch, attached to an overhanging roof, in a garage or shed, etc.), think first if it really is going to be bothering anybody. If it’s not located in a spot where people are likely to disturb the nest, you probably won’t have to intervene. It may be useful to mark the location with orange safety tape and put out a sign warning visitors of the location.

If the nest is in a spot where humans or pets are likely to disturb and alarm the wasps, on the other hand, don’t hesitate to remove or destroy it. After all, yellow jackets, hornets, and paper wasps are not threatened insects and death of one colony is not a tragedy. Note that nests are easiest to remove in the spring when there are not many worker wasps.

If the nest is visible, there are commercial insecticides that you can spray into the nest. Do so at night or very early morning when the wasps are asleep. You may need to repeat the treatment more than once. When you see no more wasps leaving the nest during the day, you’ll know the colony has been eliminated.

In many cases, though, the nuisance wasp nest is simply not accessible. That can be the case when it’s inside a wall, in rocks, in a wood pile, etc. That’s the kind of situation where you need to call in an exterminator.

Can You Keep Wasps From Nesting?

Nope. At best you can chase the queen away if you catch her starting a nest. Those decoy wasp nests that are supposed to chase away wasps before they settle in, whether homemade or commercial, simply don’t work. You’ll find more information on that subject here: Wasp Repellents: Do They Really Work?

When wasp nests threaten neither humans nor their animal friends, which is the case in the vast majority of situations, the best thing to do is develop a “live and let live” attitude. And that’s doubly true as summer advances, as the wasp colony has only a few more weeks more to live anyway!

3 comments on “Wasps in Your Garden: What to Do?”