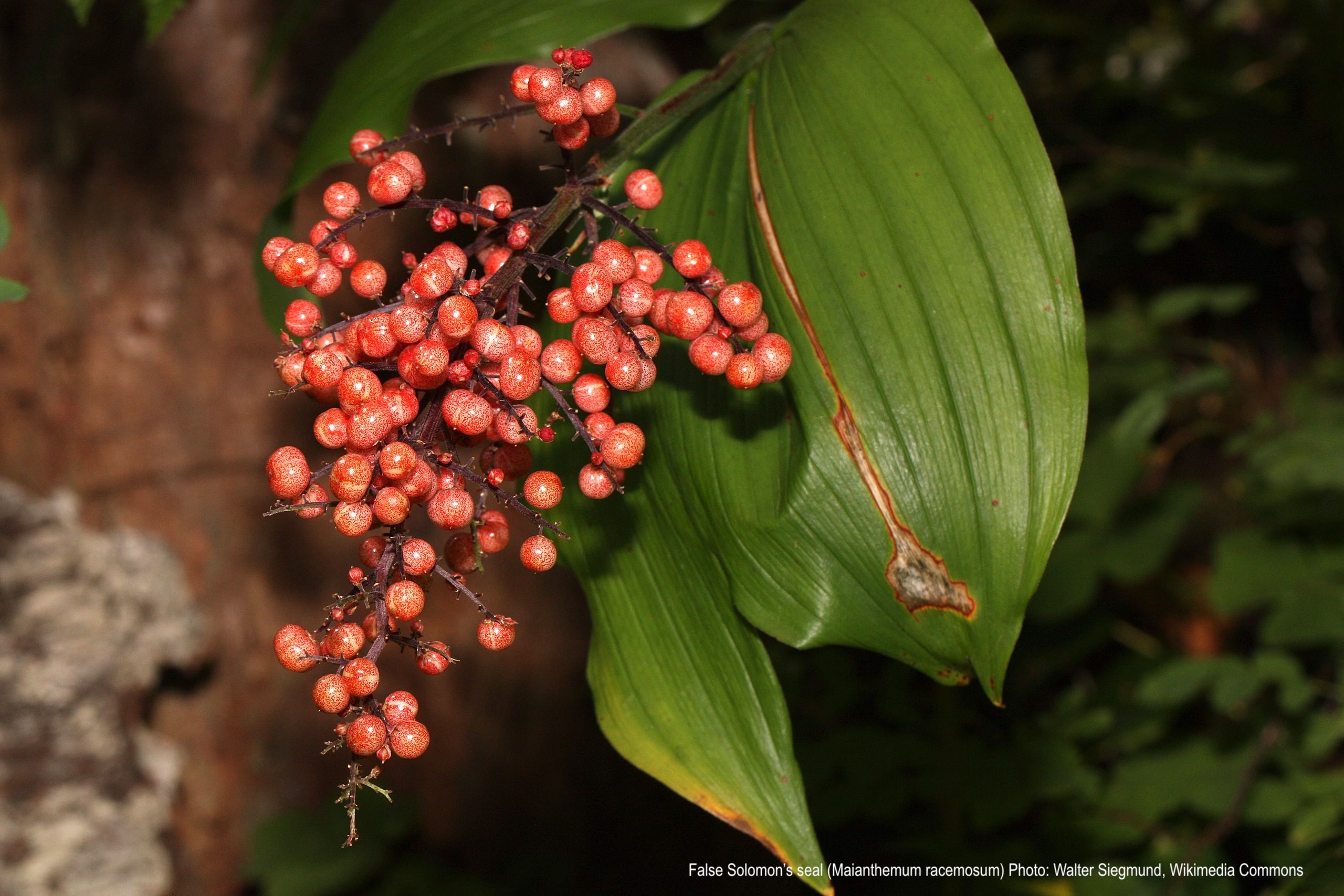 Gardeners mainly grow perennials for their flowers (think of astilbes, daylilies, peonies, etc.) or, if not, their foliage (hostas, heucheras, ferns, etc.). Much less is known about perennials with attractive berries. So, why not take a look at these rather special plants in today’s article?

It must be said that there are relatively few perennials with attractive fruits: colorful berries are, for the most part, the domain of trees and shrubs (hollies, mountain ashes, crabapples, viburnums, etc.). But while perennials with pretty berries are rare, that doesn’t mean they don’t exist. And what’s more, most offer two seasons of interest: beautiful blooms in spring or early summer and pretty fruit later in the season. And maybe attractive leaves as well. So, these are very interesting plants that really only need a bit of publicity to achieve greater popularity. Here are some examples:

You can see why people called this plant from forests throughout much of North America “false Solomon’s seal”: it is definitely similar to the more popular Solomon’s seal (Polygonatum spp.) in its habit, with an arching stem bearing alternate pointed oval leaves. However, rather than having small hanging flowers dangling from the leaf axils so that they are somewhat hidden by the foliage, the small fragrant white flowers of false Solomon’s seal are perfectly visible, since they’re grouped in a feathery cluster at the tip of the stem.

They appear at the end of spring, offering a good start to the season. But the show doesn’t stop with spring. Small round fruits develop next, green at first, and then golden, then bright red by the fall, usually reaching their best color after the leaves have started to die back. They are edible, too, but bittersweet and not to everyone’s taste. The plant multiplies over time thanks to short underground rhizomes, forming a beautiful large clump. You can divide the clump if it starts to take over too much space.

Grow false Solomon’s seal in partial shade or shade in almost any well-drained soil. In sites where the soil is rich and moist, it reaches up to 40 inches (1 m) in height; in drier or poorer soils, or if grown in full sun, it will remain smaller, sometimes less than 24 inches (60 cm). Hardiness zones: 2 or 3 to 8.

There are several ornamental baneberries, all of which are superb shade garden plants. In spring, when flowering, they all look much the same: medium-sized perennials (24–32 inches/60–80 cm in height) with deeply cut large green leaves strongly reminiscent of an astilbe and small clusters of white feathery flowers shaped roughly like a bottle brush. It’s when they start to fruit that you can really tell them apart.

Red baneberry (A. rubra), common in forests almost throughout North America, produces fruits that change color in early summer and retain their bright red color until fall. There is also a form of red baneberry with creamy-white fruits (A. rubra neglecta). The subspecies often quite rare in nature, although it can be locally abundant. Hardiness zones: 2 to 8.

Black baneberry (A. spicata), also called herb Christopher, is the Eurasian counterpart of red baneberry and differs from it mainly in its shiny black fruits. Hardiness zones: 4 to 8.

White baneberry (A. pachypoda), from eastern North America, produces fruits that stay green all summer, but in fall turn creamy white with a black dot at the end. This has led to it being popularly called doll’s eyes. In addition to the white berries, the stem that supports the fruit (the pedicel) becomes swollen and bright red, highlighting the white fruit and making it, according to many gardeners, the prettiest of the baneberries. A. pachypoda ‘Misty Blue’ is a popular cultivar with blue-green foliage. Another form (A. pachypoda rubrocarpa) produces deep pink rather than white berries. Hardiness zones: 2 to 8.

Baneberry fruits are poisonous, although so bitter they are usually spit out immediately. No deaths have ever been reported, but eating them can lead to an unpleasant stomach ache. It’s always important to teach children never to eat unknown fruits without the authorization of an adult.

Baneberries are mostly forest floor plants, preferring shade or partial shade, but they will tolerate full sun. The ideal soil would be rich, moist and well drained. Avoid spots where flooding is possible: they don’t tolerate sitting in soggy conditions. During periods of severe drought, baneberries can go into summer dormancy and will then lose their foliage and fruits, but they’ll regrow the following spring.

The ornamental strawberry is the result of crossing a red-flowered cinquefoil called marsh cinquefoil (Potentilla palustris) with a white-flowered garden strawberry (F. × ananassa). This unlikely cross resulted in a plant that fully conforms to our image of a strawberry plant, but with pink or red flowers rather than the strawberry’s usual white ones. The earliest varieties, like ‘Lipstick’ or ‘Shades of Pink’, produced a lot of flowers, but few fruits, but modern ornamental strawberries, like ‘Toscana’, ‘Rosalyne’ and the various varieties of the Berried Treasure series, produce plenty of nice big red strawberries—as attractive as they are delicious!—throughout the summer and often until October.

The ornamental strawberry forms a rosette 6 to 10 inches (15–25 cm) high and wide composed of evergreen trifoliate leaves. The 5-petaled flowers (semi-double varieties have extra petals) are ever-bearing: they flower and fruit throughout the summer. They come in different shades of pink, white or red. The plant develops long, creeping runners that produce baby plants at their tips. These take root, each forming a new plant. Over time, your original plant will make a lovely carpet! On the other hand, you’ll obtain more flowers and fruits if you remove most of the babies.

You can grow these strawberries in a flower bed, of course, but they also look great in a deck container or a hanging basket. Hardiness zones: 3 to 8.

This short groundcover plant is a common resident of the North American and eastern Asian boreal forests, although it remains quite rare in gardens. Each plant bears 4 or 6 leaves in a whorl at the top of a short 6 inch (15 cm) stem. In the center of the leaf cluster is an inflorescence made up of a clump of small, fertile flowers surrounded by large white bracts. This striking bloom has always been the plant’s main draw, but the red berries (they don’t color up until the fall) are spectacular too. However, the plant is self-sterile: you therefore need 2 different clones growing nearby to ensure good fruiting. The foliage also turns a beautiful red in late fall.

Plant this species in a permanent spot (it does not appreciate disturbances) and just let it grow. It spreads, although slowly, through offsets and is easy to control. It’s often found in rather moist, acidic soils in the wild, but appears to adapt readily to other soil conditions. It usually grows in shade—even deep shade—in the wild, but it tolerates sun too as long as its soil doesn’t dry out for long periods.

This is a plant for northern gardeners, especially a good choice in areas with cool summers. It fails to thrive in hot climates. Hardiness zones: 2 to 6.

This perennial is highly invasive, with long rhizomes producing offsets far from original plant, and I can’t recommend it for a flower garden … unless you control it with a barrier. You need to surround it with an impenetrable border at least 1 foot (30 cm) deep. Typically, gardeners use a large pot with the bottom removed, sinking it into the ground and planting the Chinese lantern inside.

It is a plant with erect stems 1 to 2 feet (30 to 60 cm) tall and oval pointed dark green leaves, bearing rather inconspicuous creamy-white flowers in early summer. To be honest, the whole plant looks rather insignificant, even ratty (it tends to suffer disease and insect damage) … until fall. At that point, papery lantern-shaped capsules, until then green and inconspicuous, take on a flamboyant orange hue and become a real eye-catcher. At the heart of each capsule is a small red “cherry” which is perfectly edible when fully ripe (although an urban legend claims it should never be eaten). Be forewarned, though, that the rest of the plant is indeed poisonous, including the immature fruits.

Few people grow this plant for its garden appearance. Rather, it’s something you would likely plant in an out-of-the-way spot with the idea of harvesting and drying the stems with their “lanterns” intact for use in dried arrangements.

If the description of this plant reminds you a bit of a ground cherry (Physalis pruinosa), you are quite right: both are in the genus Physalis, but the Chinese lantern (P. officinarum) has much more ornamental capsules than the ground cherry and is also solidly hardy (hardiness zones 3 to 9) whereas the ground cherry is an annual.

And those are only a few of the possibilities. Among other perennials with remarkable fruits, think of mock strawberry (Duchesnea indica, now Potentilla indica), goldenseal (Hydrastis canadensis), lily of the valley (Convallaria majalis) and various horse gentians (Triosteum spp.), spikenards (Aralia spp.) and jack-in-the-pulpits (Arisaema spp.).

So, the next time you choose perennials for your flower bed or woodland garden, don’t stop at looking into the appearance of the flowers and leaves. Perennials with attractive fruits can also be a great help in beautifying your landscape!