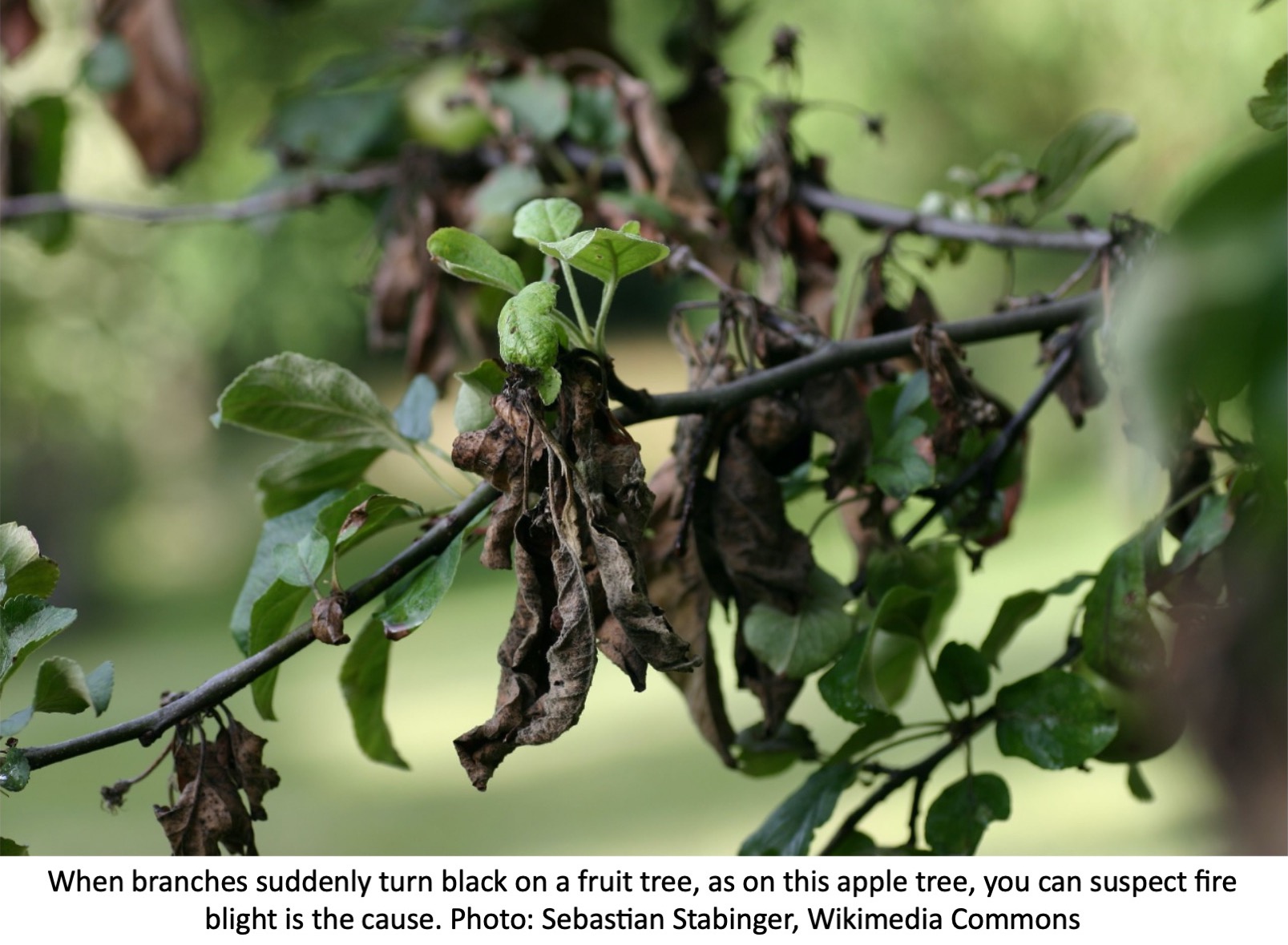 Fire blight is a disease mostly commonly seen on trees and shrubs of the Rosaceae family: cherries, apples, hawthorns, plums, mountain ashes, roses, cotoneasters, raspberries, etc., but also lilacs and other trees and shrubs. It seems to come out of nowhere at various points during the growing season, although often shortly after flowering. The symptom is quite recognizable. Suddenly, the leaves of one or two branches turn black and curl down, as if scorched, but without dropping off. Any fruits present on those branches mummify. Often the leaves and fruit linger on the tree all winter.

In the second year, other branches are affected. The disease can spread quite rapidly, causing cankers, discharge and bark discoloration on larger branches and the rapid death of any twigs that are affected.

This disease is caused not by a fungus, the usual source of plant diseases, by a bacterium, namely Erwinia amylovora in the case of the form that attacks members of the Rosaceae (rose family). It’s is mainly carried to the tree by bees or other insects during pollination, then is spread by rain as it drips down the plant from the outer branches to the trunk.

In some cases (in mountain ashes and wild cherries, in particular), fire blight is linked to senescence (deterioration due to aging). In such cases, the tree affected is already in decline, then fire blight moves in and finishes it off. In such cases, there’s nothing to do other than to cut and burn the affected tree so that the disease doesn’t spread to other plants in the area.

Sadly, though, fire blight doesn’t just attack aging specimens, but can also affect previously healthy trees and shrubs. This is commonly the case with fruit trees and it can cause them to produce less or even die well before their time.

You Can’t Always Save a Tree with Fire Blight

Actually eradicating fire blight is very difficult. Often, in spite of a lot of effort invested in trying to save a diseased tree, the disease progresses year after year. Sometimes a determined gardener only admits defeat when the last branch dies.

When a tree is diagnosed with fire blight, it’s often best to eliminate it right away, especially if it’s an “ornamental,” as it will quickly cease to play its primary role!

On the other hand, a fruit tree with the disease can sometimes produce good crops for several or even many years. You have to be the judge as to whether trying to keep a diseased tree alive any longer is worth the effort.

Here’s what to do to treat a tree or shrub with fire blight.

In dry weather, shortly after you’ve noticed the infestation, prune off the affected twigs between 1 and 2 feet (30 and 60 cm) below the infected part and burn them. Sterilize the pruning shears between each cut with isopropyl alcohol (rubbing alcohol, surgical spirit). And cross your fingers!

Sometimes people try fungicide treatments, whether organic or not, after pruning the affected branches, but the disease is bacterial and not fungal, so you can’t expect fungicides to be very effective. There are indeed bactericides that can sometimes be effective (streptomycin, for example) and may be available to commercial orchardists, but as far as I know, none are accessible to home gardeners.

Logically, you could try to keep bees and other pollinators, the main propagators of fire blight, away from trees and shrubs while they’re in bloom, but then there would be no fruit. Not really what you want if you’re growing fruit trees!

The best solution is therefore to plant, from the start, a variety known to be resistant to fire blight. This kind of information is actually quite widely available. Well, maybe not in garden centers that sell fruit trees (one has to wonder why they continue to offer so many varieties well known to be disease magnets!), but online or by contacting a specialty nursery. For example, you can find lists of apple and crabapple trees that are resistant to diseases (including fire blight) in the articles No-Spray Apples and 50 Different Disease-Resistant Crabapples.

Fire blight: this is not an easy disease to control. You’ll just have to do the best you can!