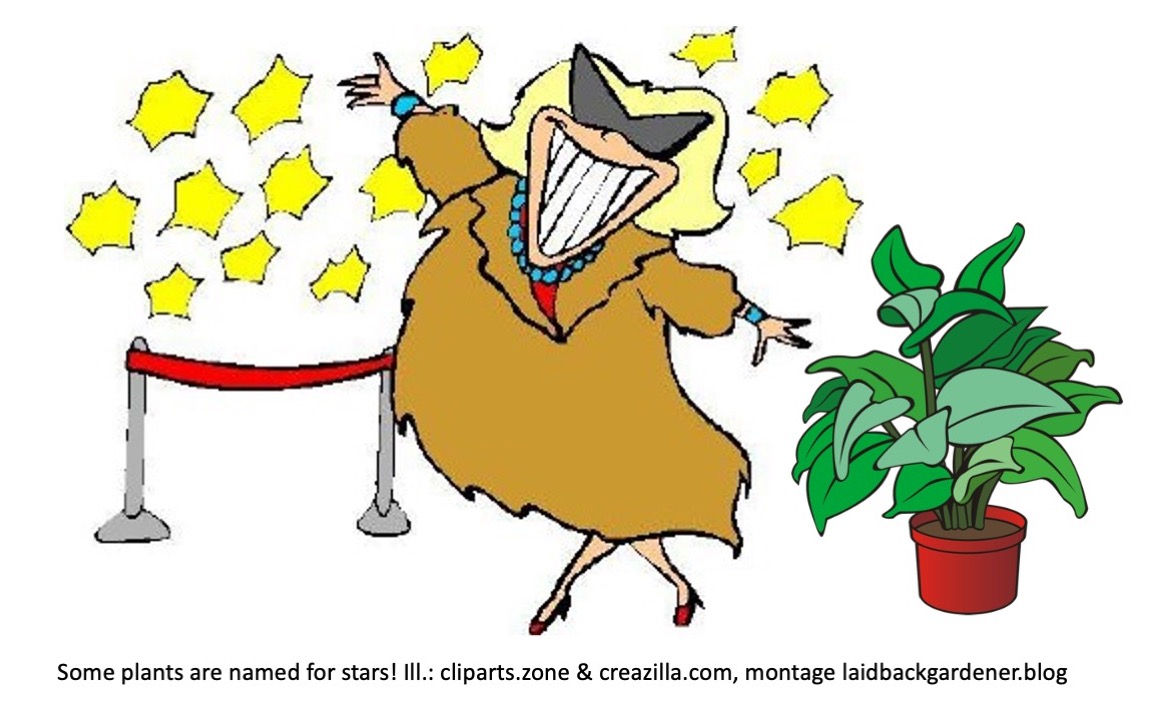 There’s a long history of giving plants a scientific name in honor of an important person. Such a name is called a patronym. In the past, these honorifics largely went either to other botanists or plant collectors (Linnaea for Linnaeus, the father of taxonomy, Rudbeckia for father and son Swedish botanists Olof Rudbeck, Berberis darwinii for Charles Darwin, etc.) or supporters of scientific research (the genus Clivia, for example, is named for Lady Charlotte Clive, a long-standing patron of botanical research).

Others, though, were named for famous people who probably had little to do with horticulture.

I don’t know that Queen Victoria, honored multiply times with patronyms, including Victoria, a genus of waterlilies, and Agave victoriae-reginae, among others, was particularly interested in botany, but she certainly was renowned. And although George Washington did love to garden, if the palm genus Washingtonia was named after him, it was to honour him for his role as the first president of the United States, not his vegetable-growing hobby.

Cultivar Names: Not Quite the Same

Of course, there are also cultivar names (names given to cultivated varieties of plants, mostly hybrids). These are the names that follow the botanical name and are surrounded by single quotes. There too is a long history of honoring people living or dead by naming a flower after them. The peony ‘Sarah Bernhardt’ springs to mind, of course, as do the rose ‘Queen Elizabeth’, the sedge Carex caryophyllea ‘The Beatles’ and the orchid Rhyncattleanthe Memoria Luciano Pavarotti. And did you know that Elizabeth Taylor, Tina Turner and Julio Iglesias are just a few of the many celebrities who have had roses named for them?

The advantage of a cultivar name as an honorific is that you don’t have to Latinize it, making it more instantly recognizable than the often-obscure botanical name. I mean, would elizabethtayloriae really be all that recognizable?

Also, while it takes a correct botanical description, usually done by a taxonomist or the botanist who discovered the plant, and publication in an official scientific journal to endow a plant with a Latin name that will be accepted, anyone can give a plant a cultivar name. If you sow some phlox seeds and one comes up that you find particularly attractive, you could multiply it and name it for your favorite star, say ‘Sponge Bob’. No annoying Latin description needed!

The disadvantage of honoring someone with a cultivar name, though, is that most cultivars have a rather short life. Most new plants simply disappear after a few years without making a splash. I mean, how many of the latest cultivars so popular a century ago do we still grow? And I’m not sure how long we’ll be growing more recent introductions like clematis ‘Prince Charles’ or bearded iris ‘Cher’.

A scientific name, though, is forever. Even if the species goes extinct, the botanical name will still be recorded in the annals of science. And many scientific names indeed go to extinct species found as fossils.

These days, the trend in botanical names seems to be towards honoring celebrities with no specific connections to botany; just people everyone has heard of. Stars, fashion icons, etc. These are names that, theoretically, will long outlive the honoree.

Here are some examples:

Blakea attenboroughi, an Ecuadorian tree, Nepenthes attenboroughii, a tropical pitcher plant, and Hieracium attenboroughii, a small British wildflower, were all named after the naturalist and television presenter, David Attenborough … and he has more than a dozen animal species named for him as well!

Corynopuntia guccinii: a species of cactus that honors the Italian singer-songwriter and author Francesco Guccini.

Gaga: a genus of 19 fern species named for American pop singer-songwriter-performer Lady Gaga. One of the species is Gaga monstraparva whose epithet means “little monsters”, a name Gaga lovingly calls her fans.

Macrocarpaeae dies-viridis: an Ecuadorian shrub. Its name is a bit more obscure than the others cited here: the epithet dies-viridis, from the Latin dies for day and viridis for green, honors the American pun-rock group Green Day.

And this is likely only a drop in the upcoming bucket. As more and more the world’s plants are identified (some estimates suggest that over a quarter of the some 400,000 plant species on this planet have yet to be officially identified), botanists will be looking for interesting names for the plants they describe … and naming a plant for an admired celebrity is such an easy stretch.

If you become a celebrity, perhaps you can have an obscure or possibly even extinct plant named for you! Wouldn’t that be something!

2 comments on “When Plants are Named for Celebrities”