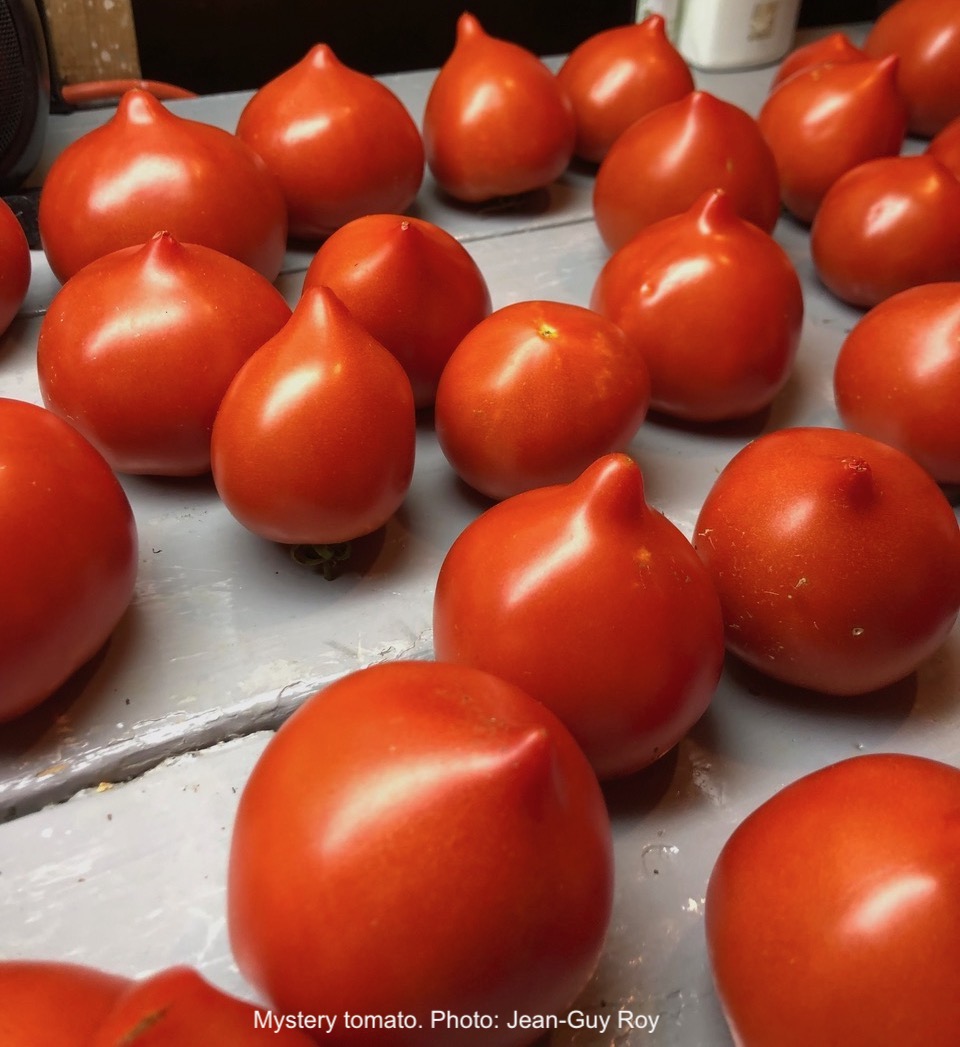 Question: I’ve sent you the photo of the tomatoes that grew in our garden this summer. Can you tell me what variety it is, because it’s not what I was expecting. As I usually do, I bought tomato plants labeled ‘Sunstart’ in the spring, but they turned out to be this variety instead. And I’m impressed: I got an amazing harvest and they’re delicious. I’d like to grow them again.

Answer: Well, you’re right. They certainly aren’t ‘Sunstart’ tomatoes. They’re beautiful red tomatoes, but perfectly round, with no hint of a “nipple.” There must have been some confusion at the growers.

That said, it’s always difficult to put a name on an unidentified tomato. With over 10,000 tomato cultivars (that’s the number suggested on the Internet, but I don’t claim having tried counting them!) and a lot of duplication in their naming (confusion reigns in the tomato world where the same variety often has 4 or 5 different names!), imagine how complex identification can be!

However, the shape of the tomatoes in your photo, with their clearly pointed fruit, makes me think that it’s likely to be the heirloom tomato ‘Téton de Vénus’ (French for nipple of Venus), a name which evokes the shape of the fruit which can resemble a woman’s breast complete with a nipple. It’s sometimes sold under the (illegitimate) names ‘Breast of Venus’ in the United States and ‘Venusbrüstchen’ in Germany.

It’s an Italian tomato based on its dense pulp and low seed count, but not necessarily from Italy, despite what some information sources claim. I believe that the fact that Italians also call this variety ‘Téton de Vénus’ rather than the Italian equivalent “Capezzolo di Venere” suggests a French origin instead, and indeed, other sources do maintain it is a French tomato, although I was unable to find out any details about its history.

Oddly, a few other sources claim this plant is of Navajo origin. I figure it’s very unlikely that a tomato developed in Navajo hands in the Southwestern US would end up with a French name. It’s much more likely that ‘Téton de Vénus’, in its worldwide spread a century or so ago, and indeed, it is grown all over the world, ended up in Navajo Territory, was adopted by the tribe and they kept the name.

There are of course other red round tomatoes that have a nipple tip, for example ‘Garden Gem’, ‘Jolly’, ‘Nueva Vizcaya Nipple’, ‘Rianto’ and undoubtedly others, but if you want to buy the same tomato plant next year, I still think the most likely candidate is ‘Téton de Vénus’, as it’s so widely grown, not a niche variety like the others. Or collect seeds from your fruits and sow them yourself in the spring: that way, you can be absolutely sure of getting what you want. ‘Téton de Vénus’ is, after all, a heritage tomato and will come true from seed.

5 comments on “Identifying a Mystery Tomato”