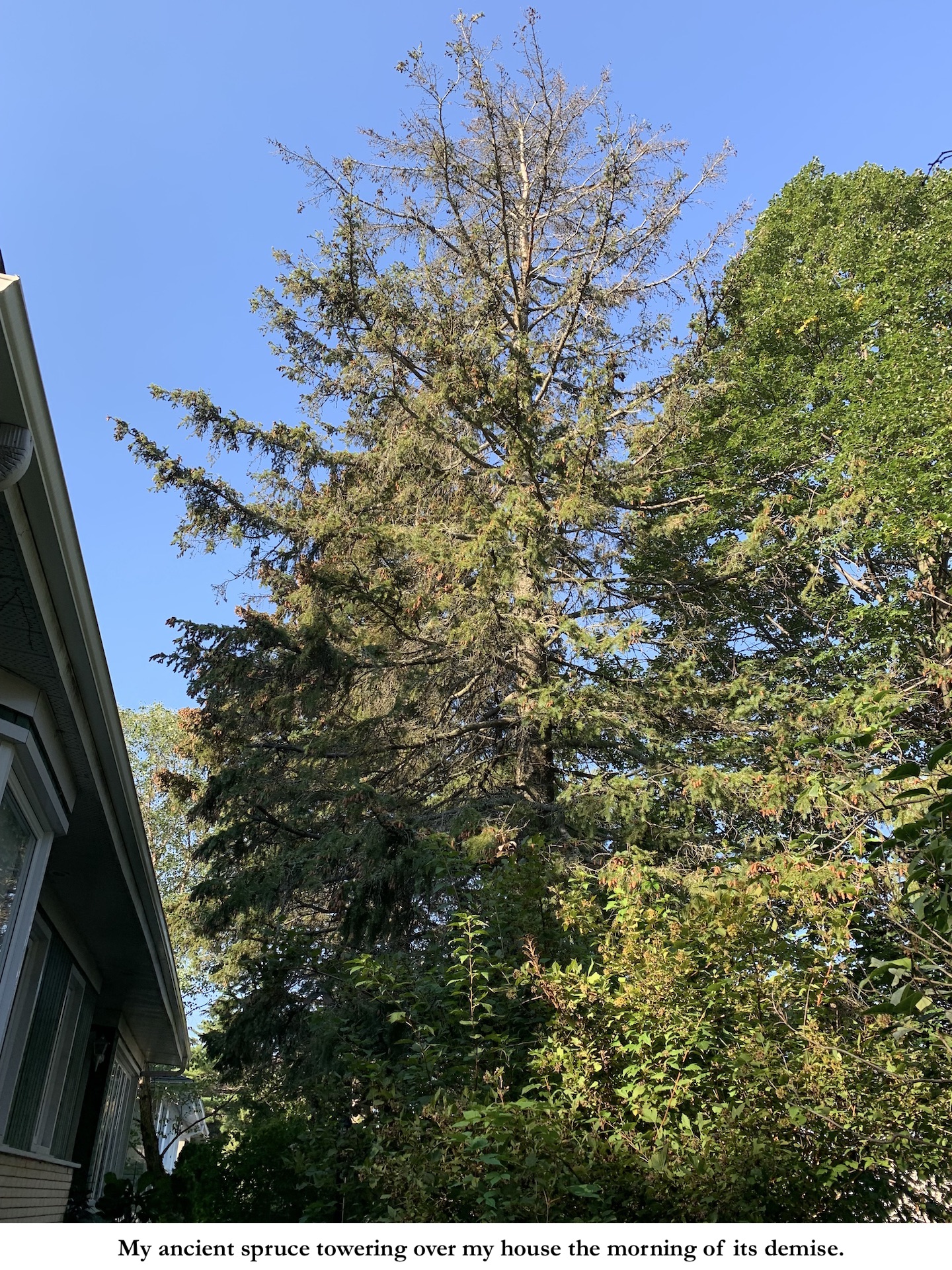 Last week, I had a mature spruce tree taken out.

It was already there and fully mature when we moved to this house 28 years ago, and since the house is about 70 years old, I assume it’s close to that in age, probably planted by the first owners shortly after they bought the house.

To be honest, I never really liked that tree … nor its two brothers, planted in a line right next to the house. They’re far too big to be so close to the building: I have had to cut off many branches over the years that tried to take over our main walkway to the house as well as those that were rubbing against the walls or the roof. Plus, they put my garden (I took out the feeble excuse for a lawn previous owners’ had tried to maintain 25 years ago) in deep shade, constantly shower it with cones and needles, dry out the soil with their dense, shallow roots and steal most of the minerals. Gardening under them has been quite a challenge, but one I’ve succeeded in overcoming. (I used the experience as a basis for one of my most popular books, Making the Most of Shade.)

Still, I’d come to accept that big spruce as “part of the décor.” Any planning I’d done over the years took the tree into consideration. And it did give a cool spot where we could sit outside on hot summer days. I was “all right with it,” I suppose. Sort of like a neighbor who can be annoying sometimes, but friendly enough, whose foibles you’ve come to know and feel comfortable with.

Now, a white spruce (Picea glauca) can live for 200 years or more, but this one wasn’t going to. The once vigorous annual growth had slowed to nothing over the last few years and last summer, branches in the top began to die back. While there was still some green growth near the top this spring; by early September, the top (10 feet/3 m) was entirely dead and branches just below that were dying. It was mostly dying from the top down, but even the lower and middle branches were looking thin.

What was killing it? I don’t know. I’m assuming some sort of fungus. Nor do I care, really. In a forest, Ma Nature takes out a tree here and there all the time for no obvious reason. And that is what was happening in my own personal forest.

In another place, like a natural woodland, I could have left the tree standing for woodpeckers to dig into and animals to nest in, but this tree is far too close to the house.

In my estimation, the trunk was solid (something that was confirmed when it was cut), so there was no real danger of it falling, at least not for many, many years. By my wife was less confident. In fact, she was close to being in panic mode. For her, a dead tree only a few feet from the house was a constant danger. She wanted it gone.

Well, there are plenty of other trees on our lot, both young and mature. One less wouldn’t do much damage to the local heavily modified ecosystem. So, I let my wife win this one.

Therefore, I set out to obtain a tree removal permit from my municipality and find a trustworthy arborist. After all, I needed someone competent make sure this tall tree would come down without damaging my house just below.

Getting the Job Done

Watching an arborist and his assistants cut down a huge tree in such a restricted space something quite impressive.

The arborist hooked himself around the trunk (already bare of the lowest branches for some 20 years, long ago shaded out by the upper ones) and up he went, removing the branches one by one from the bottom to near the top, letting them fall onto the ground where his assistants gathered them and dragged them down to the street where they tossed them into the wood chipper they’d placed there. Soon the needles and branches were shredded into tiny pieces and blown into the back of their truck.

When he got close to the top, he wrapped a rope around the trunk, sawed it off with his chainsaw, then lowered it to the ground.

From then on, he fixed the rope around a section of trunk, sawed through it, then lowered it for his acolytes to haul away in the back of their second vehicle, a pickup. (We didn’t want the wood.)

Less than 90 minutes later, they had cut the trunk right to the ground (I didn’t ask for their stump removal service: I’ll just put a pot on the stump next summer to hide it) and were cleaning up. Fast and efficient!

Obviously, falling branches and pounding feet had left the ground underneath the tree, a naturalized shade garden of mostly native plants, with a few variegated garden plants for extra ornamentation, in a mess, with crushed and broken vegetation everywhere. I had only requested they be careful to not damage a small tree, a pagoda dogwood (Cornus alternifolia), situated only feet from the trunk. I had planted it a decade ago as an eventual replacement for the spruce (I must be clairvoyant!) and they carefully respected that request, dropping branches everywhere but there.

But I’m not concerned about the mess. The tree came down in early fall and the perennials were well on their way towards dormancy, already having absorbed the solar energy they need for next year’s growth by then. I just left the torn leaves and crushed stems where they lay, a bit of extra mulch for next year. I have every expectation they’ll all be just fine next spring.

Under the ground in that sector, there are also thousands of mostly self-sown spring bulbs. I’m not concerned about those either. They were safe underground. They’ll be back come next spring as if nothing had happened.

What impresses me is all the sunlight that now reaches the soil. This part of the garden has been dominated by the dense shade of an evergreen for at least 50 years. And surrounded by other trees, including spruces. All the perennials and bulbs had been growing in just about the deepest shade you can imagine. Next spring, most will find themselves in sun. Well, not full sun, but dappled sun, with plenty of shade from the house (the garden is on the north side of my residence), but still quite an improvement.

I’m actually expecting most of the plants to grow much better in the future. No green plant “likes” deep shade. Shade-tolerant plants do as their name suggests: they tolerate it. They would all prefer more light.

There will be more moisture for them as well (spruce roots really suck up water!) and minerals.

I won’t be planting another spruce or other conifer to replace the one lost. The replacement tree, the pagoda dogwood, is already there and although spindly now, will probably fill in considerably now that the spruce is gone, what with all the extra light it will receive. It’s a much smaller tree that will never get tall enough that we need to be concerned about it damaging the house when it falls.

So, goodbye spruce: it’s been, if not a pleasure, at least an interesting experience! But your time had come. My garden is now ready to move on.

16 comments on “Saying Goodbye to an Old Friend”