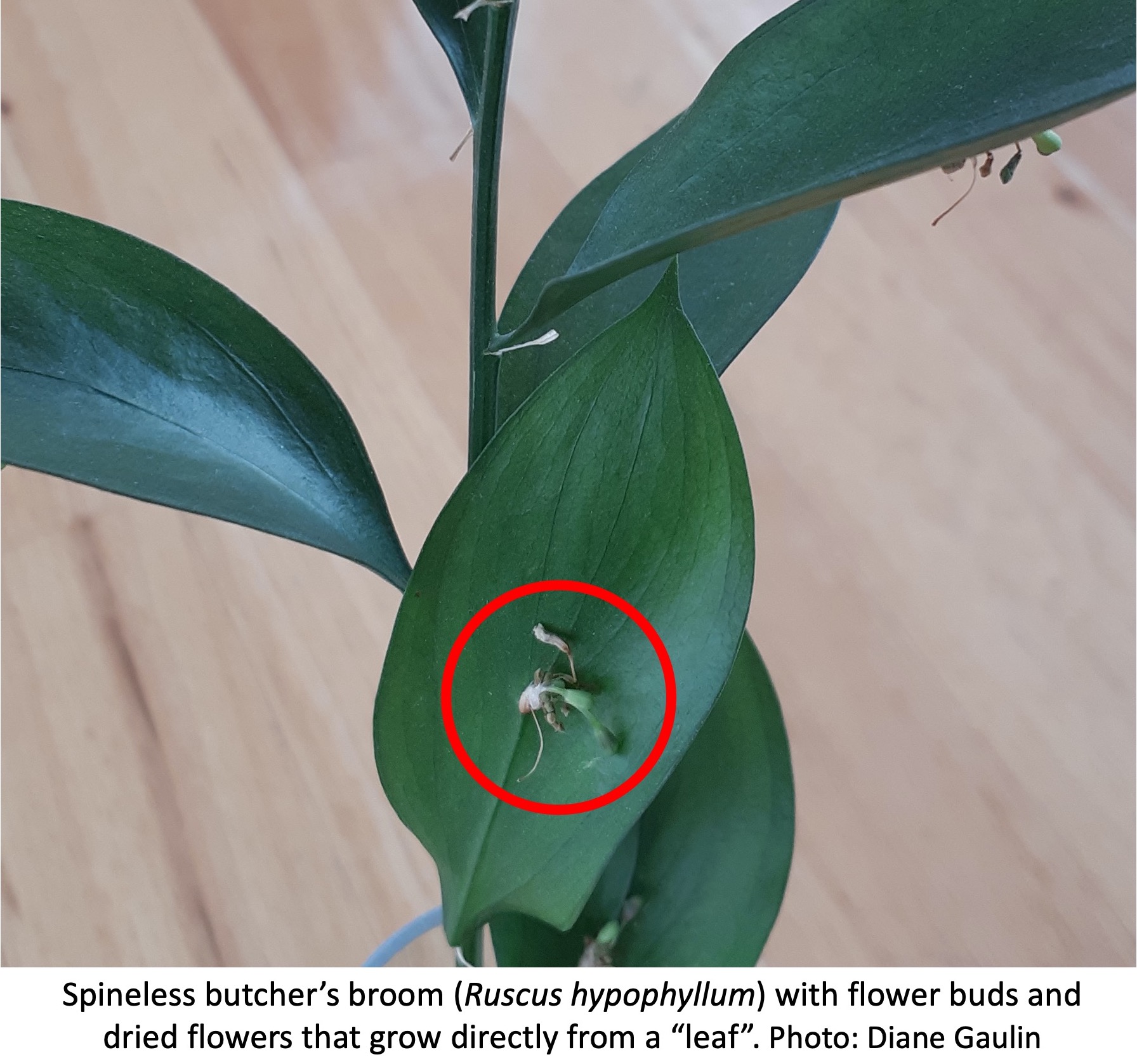 Question: Several months ago, I received a bouquet of flowers. When the flowers wilted, one green branch still looked in fine shape, so I put it in a small vase of water in the hopes that there would be roots someday. So far, though, no luck. However, small protuberances appeared on the foliage. I tried removing them and sowing them, but nothing came up. I would like to know the name of this plant. And what are those little buds?

These stems are sold to florists around the world as filler material.

A Leaf That Bears a Flower?

Butcher’s broom* is a shrublike evergreen perennial, but it’s definitely not a typical perennial.

*The name “butcher’s broom” comes from the former use of clusters of these stems as brooms in butcher shops.

Its most curious aspect is its foliage. The broad green pointed growths we take for leaves are not leaves, but rather flattened stems called cladodes. (The actual leaves are tiny and rarely noticed.) The plant photosynthesizes via these cladodes. When the plant blooms, small flowers emerge directly from either the top or the bottom of the “leaf” (cladode). How often do you see a leaf with a flower in the middle? But cladodes aren’t leaves, they’re stems and stems do bloom. The protrusions you noticed are actually little clusters of flower buds and faded flowers, not bulbs or seeds. This explains why nothing comes up when you try to sow them.

Outdoors, if there is cross-pollination (plants are usually dioecious: male and female flowers are borne on different plants), the flowers lead to pretty red berries (poisonous to humans and pets, by the way). So, the fruits too seem to grow straight out of the center of a leaf … which is, we know now, actually a cladode.

The seeds in the fruits could be used for a sowing. Otherwise, gardeners usually propagate this suckering perennial by division.

Although the green stems can last for weeks or even months in water, they never take root. Thus, you can’t grow this plant from stem cuttings.

Growing Your Own Butcher’s Broom

Butcher’s brooms are usually used as groundcovers for shady to partially shady gardens (they tend to burn in full sun) and can even be used to create a short hedge (R aculeatus can reach 2 to 3 feet/60 to 90 cm in height; R. hypophyllum, about 18 inches/45 cm). Often the stems, whose berries are bright red in fall and winter, are used as Christmas decorations.

Both will grow in most soils, even poor, stony ones, and are very drought tolerant. In general, they require little care.

Theoretically, you could also grow this plant as a houseplant … provided you find a plant, not just a stem taken from a florist’s bouquet. But, in many areas where it isn’t hardy, plants of butcher’s brooms of any species are simply not available.

5 comments on “Strange Protuberances On a Leaf”