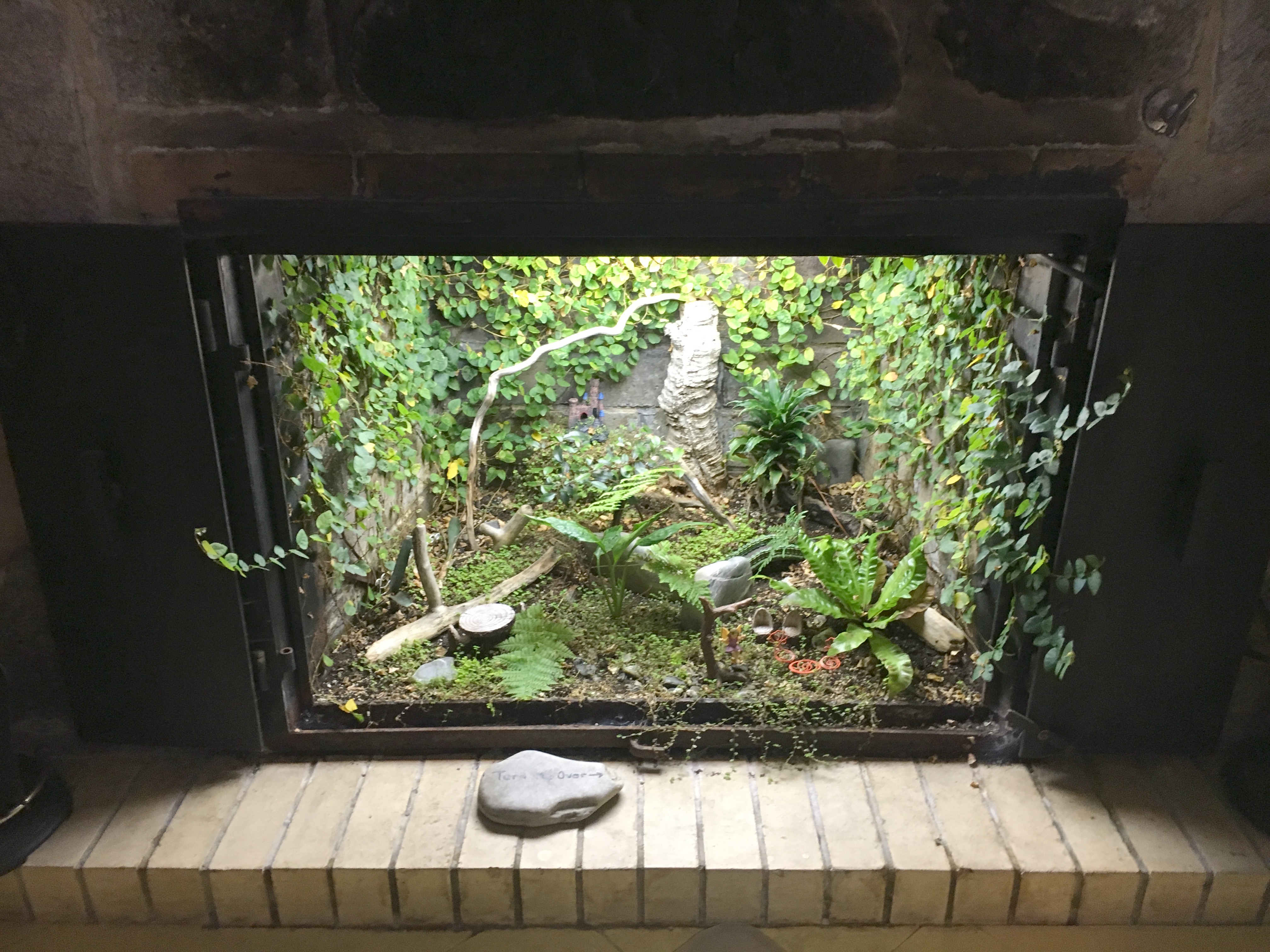 You can easily turn an unused fireplace into a green space.

When we bought our house nearly 30 years ago, there was a fireplace in the family room in the basement, but we soon converted that space into my home office. The fireplace was now behind my desk, with me facing away from it as I worked. There was no way I would want a fire at my back, so the fireplace remained unused and we eventually had the chimney closed by a specialist to prevent the elements from getting in. Of course, we were warned never to light a fire there again … but that wasn’t a problem, as I had very different plans for it.

I wanted to turn it into a garden. All I’d need to do was to add some artificial light and potting soil and then plant it up. Simple enough!

I built a wooden frame to fit into the fireplace, setting just high enough so it would be out of sight when seen from a sitting position at my desk, and fixed it solidly to the bricks of the fireplace. To that I added two 2-tube 20-watt T-12 fluorescent lamps side by side. Conveniently, at 2 feet (60 cm) long, they were a perfect fit! (Today, I would have probably chosen more intense T-5 fluorescents or LED lamps, but I used what was conveniently available at the time.)

I also sealed the bottom of the fireplace’s black metal frame from the inside with silicone to keep any excess water from leaking out.

For soil, I simply used regular potting mix, pouring it into the fireplace to a depth of about 2 ½ inches (6.5 cm), the height of the frame. I put in no drainage layer, contrary to popular tradition, but then, drainage layers, whether of gravel, pot shards or pebbles, are a relic of old-fashioned beliefs about how plants grow and never did provide any advantage. 2 ½ inches (6.5 cm) of soil doesn’t give much depth for roots, but still, it would have to be enough for the needs of my plants.

I planted up my fireplace garden with either young plants or cuttings of plants I already had around. It turned out that many of the plants eventually became too large for the garden and had to be either removed or regularly cut back, but then, any garden needs a bit of adjustment, doesn’t it? And I had no guide to help me choose: to this day, I’ve never seen a similar fireplace garden.

The biggest success was creeping fig (Ficus pumila), with tiny, heart-shaped green leaves. The single cutting I planted up against one wall almost three decades ago spread, slowly, all around the fireplace and indeed, climbs out occasionally and has to be cut back. Thanks to its tiny aerial roots, it clings to the inner walls, covering them with greenery. Charming!

I’ve used various rocks and stones, a section of cork bark and bits of driftwood as added decoration over the years. The stones remain; the driftwood lasts years, but eventually rots. Fortunately, replacements are easily found.

My grandkids wanted to make the fireplace garden into a fairy garden a few years back, so we made several expeditions to garden centers and pet shops to find appropriate fairy material. A small fairy on a swing, a castle, a bridge, and a table and chairs were added. Silly, really, but surprisingly comforting for me during the long months when the COVID confinement kept the children at a distance.

Upkeep is minimal! Basically, I only do two things. Prune to remove dead, yellowing or overgrown plant material, and water.

The soil is so shallow that I need to water about twice a week. When the soil starts to appear pale brown, I know from experience it’s time to get at it.

Judging how much to water is not that obvious at first. When you water a plant in a pot, you know when to stop, as the excess water starts to flow out of the drainage holes, but the fireplace garden has no drainage. So, at the beginning, I watered very carefully, guesstimating the needs, then sinking a finger into the mix a few hours after I had finished to see if the soil at the bottom was moist but not wet, which would be the ideal situation. After a few weeks of doing this, you learn how much water your garden can hold and so can just repeat. And as plants grow, they’ll need more water, so if the garden starts to dry out (the soil turns pale) too quickly, you’ll find it convenient to increase the amount.

I rarely fertilize: I don’t want to stimulate fast growth.

I suppose there are a few.

After over 20 years of pretty much constant contact with moisture, the bottom of the black metal frame that surrounds the fireplace has started to rust … which doesn’t bother me in the least. It’s a very dark rust, scarcely noticeable, at least to my eyes, and the metal is so thick it will take many decades yet, I’m sure, for it to rust through. And should we want to sell the house one day, well … we could easily buy a new metal fireplace frame!

Are creepy crawlies a downside? There are always a few in any basement and some seem to like moist soil! I regularly see spiders and woodlice (pill bugs), both harmless, and once saw a small centipede, harmless yet again. I’ve never seen any others.

The crawlies and I have a long-standing agreement: they don’t bother me and I don’t bother them. There are never more than a few. I really only notice them when I water and they try to get out of the way. I pay no more attention to them than I would have in my gardens outdoors.

A fireplace garden is so simple to set up and run, I’m amazed that I am not seeing other people doing it. After all, I’m sure I’m not the only person who has a fireplace that is no longer used for Yule logs or roasting marshmallows!

I get a great deal of joy from this small garden. Several times during the average day, I swirl my office chair around to take a break and “enjoy the view.” I find it very relaxing

If you have a fireplace garden, do let me know. I’d love to see what other people are doing.

Unless otherwise mentioned, photos by laidbackgardener.blog.

4 comments on “Turn Your Fireplace into a Garden”