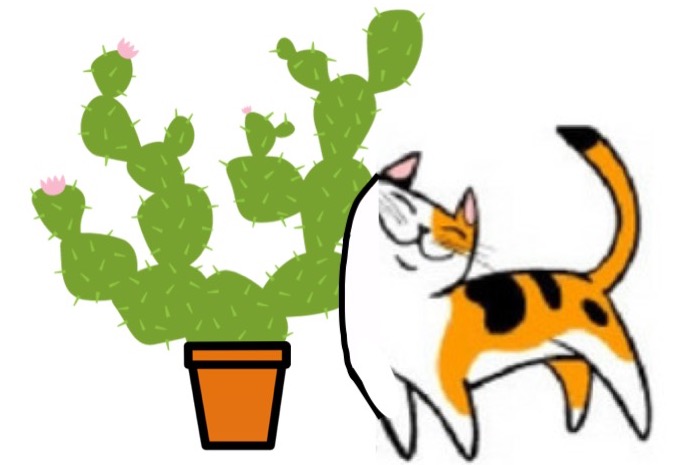 Many years ago now, my wife and I began suffering from a mild but annoying form of dermatitis: reddish, itchy hands, arms and lower legs. It was really quite mysterious: we couldn’t think of any likely cause.

Then one day I noticed our cat, Nounouche, sidling along a windowsill, brushing up against plants there as cats are wont to do. And among the plants he was rubbing against was a cute little prickly pear cactus, Opuntia microdasys, sometimes called bunny ears cactus. Bingo! I instantly knew what the problem was!

Prickly pears or opuntias (Opuntia spp.) are unusual among cacti in that they produce two types of spines. Long, fierce, painful ones that dig into the skin, draw blood and yelps and are very visible and, on the cushiony areole at the base of the vicious spines, tiny hairlike, barbed spines called glochids. While the long, nasty spines stay on the plant, glochids break off readily and work their way into the skin, causing itching and irritation that can, in sensitive individuals, last days, weeks or even months. You rarely recall running into glochids, as they seem harmless. But if you get any on your skin, you’ll remember the experience.

It just so happens that O. microdasys is one of those opuntias that lacks any long, painful spines and, in fact, looks totally harmless, as the “bunny ears” name suggests. It only bears the easily detached glochids which can be red, yellow or white, depending on the variety. As a cactus collector, you soon learn to avoid touching O. microdasys unless you are wearing gloves.

What Nounouche was doing was picking up glochids when he rubbed up against the cactus, then transferring them to us when we petted him or he brushed against us. The problem was thus easily solved: the offending cactus was moved to another spot, behind other plants, where Nounouche couldn’t get near it. I honestly don’t think I ever told my now ex-wife the cause. Already she wasn’t too fond of me filling all available window space with plants!

Ideally, you’d only wear thick, long-sleeved gloves or use tongs when handling any prickly pear, but in case glochids do get to you, remove them quickly before they work their way into your skin. To do so, use sticky tape (duct tape is perfect), softly pressing the tape over the affected sector, then yanking it off. Individual remaining glochids can be removed with eyebrow tweezers, although you may need a magnifying lens to see what you’re doing.

Once they’ve worked their way into your skin, though, you pretty much have to wait until your body reacts, causing dermatitis then pustules, then eventually expelling them.

The fruit from some species of prickly pear (usually O. ficus-indica), sometimes called by its Spanish name “tuna,” is sold commercially. Such fruit will have been rubbed or burned to remove any glochids. If you grow your own (the edible types tend to be too big and too reluctant to bloom indoors to make good edible houseplants), probably outdoors in a very mild, dry climate, harvest the fruits with tongs or thick gloves and rub them with a brush under running water to remove the glochids. Lightly scorching them with a propane torch also works, but that’s not something you necessarily should be doing near desert-dry vegetation!

So-called spineless opuntias, like O. ficus-indica ‘Burbank Spineless’, may not have long, vicious-looking spines, but they do bear glochids, so handle them with care.

In fact, handle any opuntia or prickly pear with care: while some make look as cute as a button, they all pack a hidden punch!