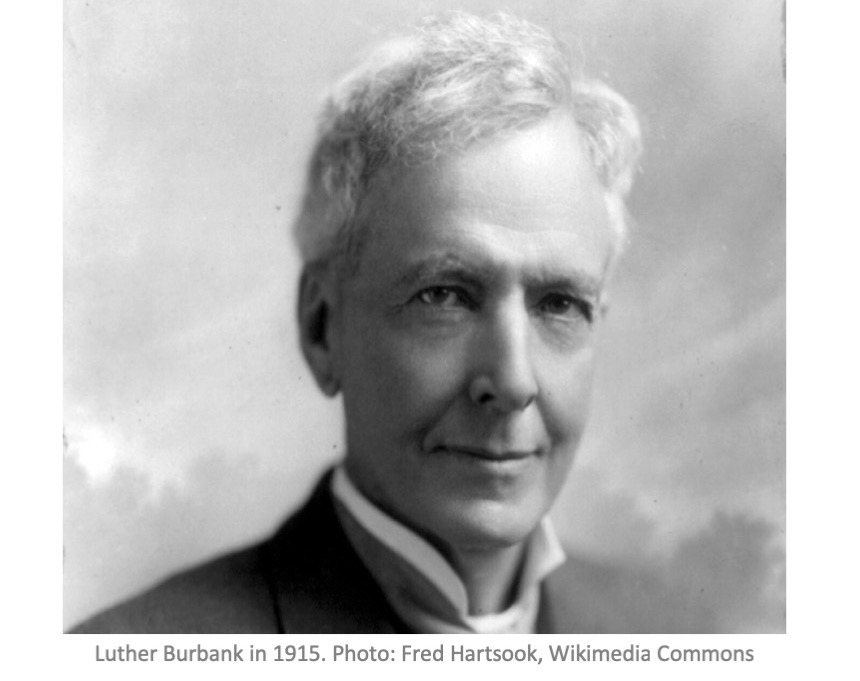 Although Luther Burbank may not be well known to modern gardeners, he was famous a century ago, known the world over as the Plant Wizard. Born March 7, 1849 in Lancaster, Massachusetts, U.S., he was probably the most famous horticulturist who ever lived.

He introduced over 800 new plants over a 55-year career, including fruits, flowers, grains, grasses, trees and vegetables. His remarkable horticultural creations stunned the world and he was avidly supported by such luminaries as Thomas Edison and Andrew Carnegie. At the same time, scientists decried his total lack of scientific rigor, as he took few notes and his explanations of his hybridization programs were more than vague.

Luther Burbank had no horticultural training and, indeed, no more than a high school education. The thirteenth of eighteen children, he was always interested in gardening. Upon his father’s death when he was only 18 years old, he used his inheritance to buy a farm in Lunenburg, Massachusetts.

There, in 1873, he developed and launched his first and probably most successful hybrid: the ‘Burbank’ potato (Solanum tuberosum ‘Burbank’).

The new potato was a seedling of the cultivar ‘Early Rose’. He discovered that it was not only productive, with large, white-fleshed tubers, but resistant to late blight (Phytophthora infestans), the disease that caused the Irish potato famine of 1845 to 1849. He hoped his new potato would prevent the recurrence of such a tragedy. ‘Burbank’ would latter give birth, by spontaneous mutation, to a russet-colored clone called the ‘Russet Burbank’. It remains one of the most widely grown potatoes in the world. Even today, most McDonald’s French fries are made from ‘Russet Burbank’ potatoes.

Burbank sold the rights to the ‘Burbank’ potato for $150 and used the money to move to Santa Rosa, California in 1875. There he set up an experimental farm with greenhouses and a nursery. Inspired by Charles Darwin’s book The Variation of Animals and Plants under Domestication, he began cross-pollinating, often trying outlandish crosses that had no chance of success or else, produced real duds, like his attempt to cross a petunia with a tobacco plant. This resulted in weak-growing, floppy plants with neither useful leaves or attractive flowers.

But then, there were also great successes: more about them later.

He would marry twice, but had no children. He was often in dire straits financially: he may have been a plant wizard, but he certainly couldn’t balance a budget! Eventually a group of friends formed the Luther Burbank Society to manage his affairs.

He died of heart failure on April 11, 1926 at the age of 77. The famous horticulturist was buried in an unmarked grave at the Luther Burbank Home and Gardens in Santa Rosa, California. This historical site is still open to the public daily, free of charge.

Some of his Accomplishments

Burbank set out to to develop a long-flowering, large-flowered daisy from the common oxeye daisy (Leucanthemum vulgare) and crossed it with several other species, gradually getting better and better plants. It took him nearly 20 years, though, to finally create the Shasta daisy (L. × superbum) we know today, named for California’s snow-covered Mount Shasta. It remains one of the most widely grown perennials in the world. One of his Shasta daisies, ‘Alaska’, is still popular today.

Burbank was very interested in fruits and considered plums his life’s work. He especially worked with Japanese plum (P. salicina) and other Asiatic species, at the time just being introduced in California, and he began crossing them with other species, notably the European plum (P. domestica). He would eventually introduce many plums to the market, including at least three, ‘Santa Rosa’, ‘Burbank’ and ‘Wickson’, that are still grown.

He likewise dabbled in peaches, nectarines and cherries, producing among others the ‘July Elba’ peach and the ‘Flaming Gold’ nectarine, both still grown today.

Starting with a French plum hybrid (Prunus domestica) called ‘Sans Noyau’, which naturally had a stone about half the size of other plums, Burbank worked for years to develop a plum with no stone at all, one you could simply pop into your mouth and eat. Unfortunately, this gave a fruit much lighter than regular plums and prune growers were at the time paid by the pound, so were not interested in a stone-free plum. It was long thought lost, but has recently been rediscovered and, who knows, may yet make its way to a farmer’s market near you!

This is a primary cross ( ½ plum,  ½ apricot) between a Japanese plum (P. salicina) and an apricot (P. armenica) and gave a fruit with the flesh of a plum and the taste of an apricot. When Burbank first introduced the plumcot in the early 1900s (he’d eventually release 11 different varieties), he was called a lier by other plant breeders, who considered this cross impossible. Eventually, though, he was proved right, as others were able to repeat the cross, and indeed, plum/apricot crosses would be further refined by others into what we know today as a pluot (¾ plum, ¼ apricot). And yes, you can find pluots in certain farmer’s markets!

Burbank was very proud of this creation, although it never caught on commercially. Starting from a wild pale-coloured blackberry found in New Jersey called ‘Crystal White’, it took him over 65,000 unsuccessful crosses to finally produce a variety with pure white fruits, ‘Iceberg’, often sold as Snowbank., which he launched in 1894. This cultivar is still around and every now and then it will catch the attention of a grower who usually promotes it as something totally new. But now you know different!

Burbank introduced more that 60 varieties of spineless cacti between 1907 and 1925. His idea was that the spineless cactus would transform deserts into places where cattle could graze and, thanks to their edible fruits and pads, could also feed the starving masses. Most of his spineless cactus are hybrids of the Indian fig (Opuntia ficus-indica) and the Mexican prickly pear (O. tuna). None reached any commercial success during Burbank’s lifetime, but some are now widely grown, notably in Mexico. Their individual cultivar names are long lost, but they’re often globally referred to as ‘Burbank Spineless’.

Here are just a few of Burbank’s other creations, most, sadly, now long gone:

Luther Burbank’s birthday is still celebrated every March 7th in California as Arbor Day. In fact, it is now feted as Arbor week (March 7-14). But wherever you live, let’s all give a toast to this fantastic plantsman on this, his birthday!