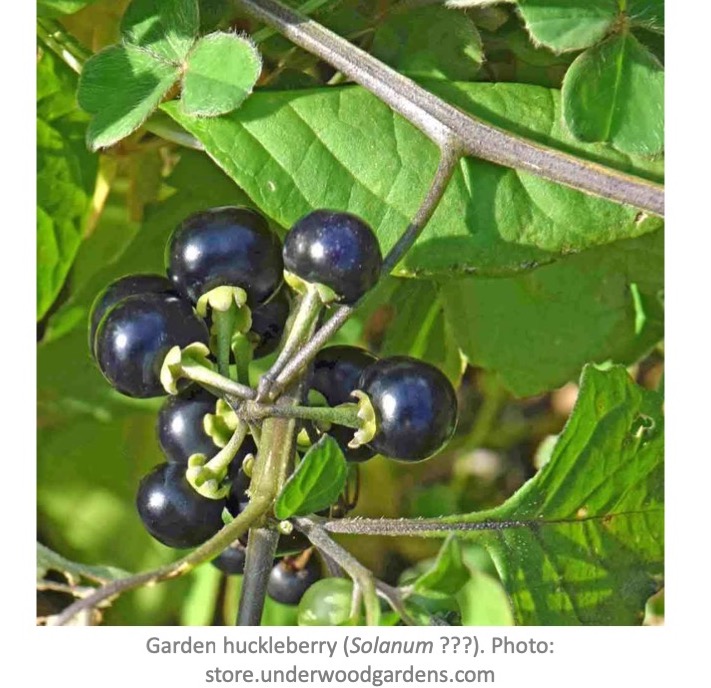 When I was a kid, I ordered seeds of garden huckleberry from a seed catalog, starting them indoors “like a tomato plant” as per instructions. This gave me a shrubby upright plant with small green leaves, star-shaped nodding flowers much like those of a tomato, but white instead of yellow, and clusters of round black berries. It was certainly easy enough to grow. I was quite enthralled … until I tried eating them.

The description on the seed packet said they needed to be cooked before eating, so my sister and I tried cooking them in a little pan in her Easy-Bake oven (a popular kid’s toy at the time). They weren’t particularly tasty: in fact, they were quite bitter, so we added sugar. And more sugar. And more sugar. We ended up with a sort of dark purple syrup which you perhaps pour on pancakes. Others use garden huckleberries (with sugar) to make pie filling and jams.

But What Is It?

My childhood experience ended there. Far from my 10-year-old brain to stop and ask what that plant really was. But as an adult gardener, I wanted to know … and now I’m more confused than ever!

About 30 years ago, I wrote an article on edible plants in the Solanaceae family, in which I mentioned, obviously, tomatoes (then called Lycopersicon esculentum, now Solanum lycopersicum), potatoes (S. tuberosum), eggplants/aubergines (S. melongena), ground cherries (Physalis pruinosa) and peppers (Capsicum annuum), among others. And I included garden huckleberries as S. nigrum, according to the taxonomy of the time.

Flash forward to today and things are much more complicated. There is now a “Solanum nigrum complex” including various species related to S. nigrum, that is, belonging to the Solanum section Solanum of the vast genus Solanum (more than 1500 species). This group includes S. melanocerasum, S. villosum, S. americanum, S.scabrum, S. retroflexum and many others.

S. nigrum itself is more properly called black nightshade or European black nightshade and is considered poisonous, causing sickness and even death in all sorts of animals, including cattle, sheep, poultry, pigs and humans, mostly after eating raw stems and leaves or unripe, green berries. The mature berries of some clones are edible after cooking as are the young leaves and shoots (the latter two are widely consumed in Southeast Asia and Africa, often with the cooking water being discarded and replaced several times to remove toxins). Other clones may remain poisonous, even after cooking. But nobody seems really sure, because in general, no one knows which species of the S. nigrum complex are actually being ingested.

A garden vegetable that may or may not be poisonous? How encouraging!

And then there is the wonderberry.

As I child, I also read about the wonderberry (S. x burbankii), created by Luther Burbank by crossing Solanum guineense with S. villosum. Today that’s considered improbable. S. guineense and S. villosum are not closely related and don’t even have the same number of chromosomes. It would be a bit like crossing a giraffe with an antelope and coming up with a fertile giraffalope.

Wonderberries are still around, with black berries that are edible after cooking, but are now considered to belong to the species S. retroflexum, sometimes called sunberry: one of the species of the S. nigrum complex. So, Luther Burbank apparently got it wrong. Well, anyone can make mistakes!

If you’re not confused by now, you should be!

For fun, try sowing Wonderberry and garden huckleberry seeds side by side and comparing. You won’t notice much of a difference.

Of course, the name garden huckleberry is a serious misnomer to start with. True huckleberries (Vaccinium spp. and Gaylussacia spp.) are closely related to blueberries and are in the Ericaeae family. Essentially, they’re blueberries that aren’t blue, but black or red.

True huckleberries are in no way related to the garden huckleberry, which is in the Solanaceae family. But yes, you can use them to make huckleberry pie!

Will the Real Garden Huckleberry Please Stand Up?

So, what’s a gardener to do?

My thought is that, if you find garden huckleberry offered in a legitimate seed catalog, it’s at least bound to be edible—seed companies whose customers die of poisoning seldom last long!—, whatever species might really be hiding behind the name.

So, don’t hesitate to grow garden huckleberries, but only harvest ripe berries. And do cook them before you make that delicious (best of luck with that!) huckleberry pie!

8 comments on “The Mystery Behind the Garden Huckleberry”