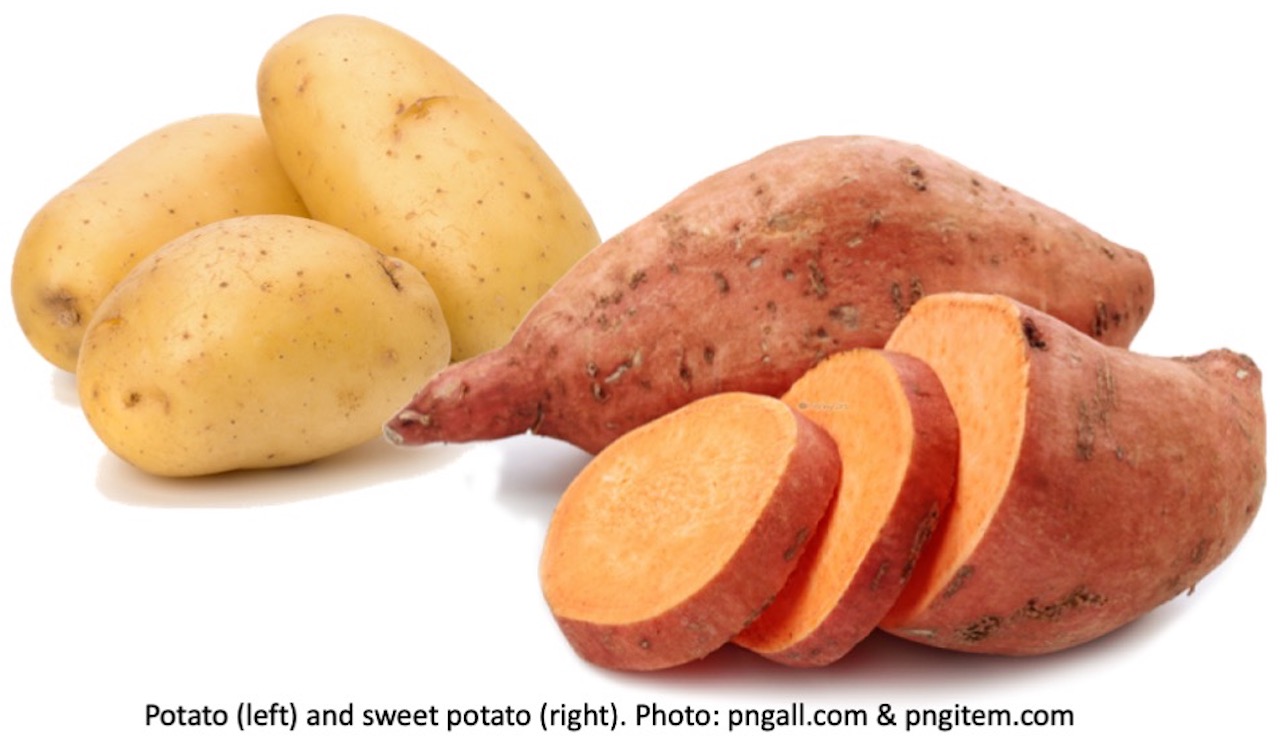 Back in the 16th century, two new tubers were introduced into the British Isles at much the same time: the potato and the sweet potato. The sweet potato was the first of the two to cross the Atlantic, possibly on one of Columbus’ voyages, and gained a certain amount of success in southern Spain, but neither tuber made much of a splash in the British isles at first.

Although both plants produce edible tubers, the two plants are not close relatives. The potato (Solanum tuberosum) is in the Solanaceae (the tomato family) and has upright stems and small, star-shaped flowers; the sweet potato (Ipomoea batatas), from the Convolvulaceae (the morning glory family) and is a climbing or creeping plant with large, trumpet-shaped blooms. Why then do they share the same common name? It’s all because of a case of mistaken identity centuries ago!

The word potato comes from batata, the Taino (a Caribbean language) word for sweet potato. The Spanish called it patata and that morphed into potato in English. The sweet potato, still called just potato at the time, would have been known as an exotic import, something for royal tables, as early as the 16th century, but wasn’t being grown in England.

The upstart Solanum tuberosum hails from the heights of the Andes where it grows under considerably cooler conditions. The Inca name for this tuber was papa and indeed, in Spanish, that is still one of its common names. It reached Europe in the mid 16th century. But what to call this new tuber? The Inca name papa never caught on in English, but, without its foliage, the tuber new looked a lot like a (sweet) potato, so at first no distinction was made between the two. They were considered to be the same vegetable and shared the name potato.

As the two tubers became more popular, it became clear they were actually very different plants. The 16th-century herbalist, John Gerard, began to refer to the sweet potato as “common potato” and the newer introduction as the “Virginia potato” or “bastard potato”. (Note that, at the time, the word “Virginia” was often used to describe anything that came from the New World, not specifically something from the state of Virginia as we now know it.)

But by the late 17th century, though, the sweet potato was all but forgotten in England: Solanum tuberosum had fully taken on it’s rival’s name and was now simply called the potato. The potato was later exported back to the 13 colonies in the New World under that name and it stuck. That’s why we call Solanum tuberosum potato to this very day. It may also be called “white potato” or “Irish potato” to distinguish it from its sweeter rival, but the word potato all on its own is sufficient for most English-speakers.

But what about the original bearer of the name potato, Ipomoea batatas? Thanks to its sugary taste, people began to call it sweet potato to distinguish it from the now commoner and starchier Solanum tuberosum and that has been its name ever since. Unless, to confuse things further, you call it a yam… a name that really belongs to yet another tuber, Dioscorea. But let’s not get into that!

Decidedly, tubers are hard to name all over the world!

Based on an article originally published in this blog on February 23, 2016.