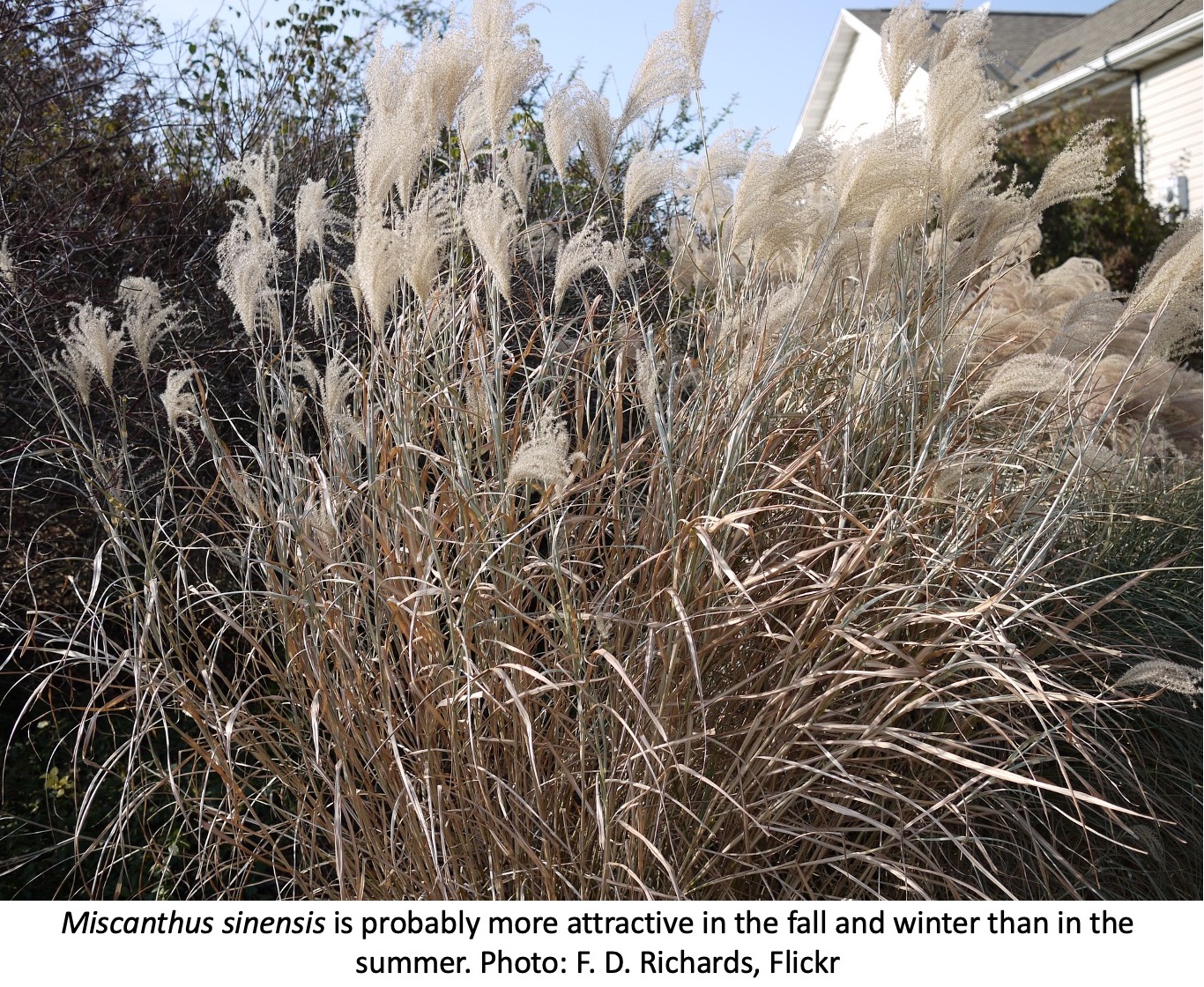 Not that long ago, pretty much the only ornamental grasses that gardeners grew in their gardens were those that made up their lawn.

For about two decades now, however, ornamental grasses—miscanthus (Miscanthus sinensis), switchgrass (Panicum virgatum), ‘Karl Foerster’ feather reed grass (Calamagrostis × acutiflora ‘Karl Foerster’), etc.—have become very popular. They are appreciated for their narrow, arching leaves that create the effect of a fountain or a dome, their graceful habit, their feathery silvery plumes and … their fall and winter effect. Indeed, even if their foliage and flower stems die in the fall, going from green to beige or brown, they retain their form and effect all fall and, if the snow is not too heavy, all winter too.

But just a few days ago, in the middle of October, I saw a home-owner hard at work cutting his grasses to the ground. Then, three houses further, another was doing the same.

Obviously, grasses have passed into the repertoire of the average home gardener, but knowledge about their care has not been fully shared.

The ornamental grasses we grow in our flower beds are not like those in our lawns: they don’t need to be cut back short in the fall. In fact, they prefer to be left alone.

Cutting them short in the fall largely removes the natural winter protection their foliage offers their crown (the part that overwinters) and that means that frost can sink deeper into the ground. If so, the cold might kill them. In ornamental grasses, if there is any pruning to be done, it’s usually carried out in the spring.

It should be understood that the ornamental grasses that we cultivate come, for the most part, from the prairies and steppes of the world (Russia, China, North America, Argentina, etc.). It’s an environment of natural fields of grasses and forbs (herbaceous perennials) as far as the eye can see, almost treeless, with cold and often snowy winters, but hot and dry summers. In this environment, the leaves don’t drop off in the fall as they would in a forest environment dominated by deciduous trees, but remain in place, protecting the plant. There is little decomposition over the winter, as the soil is usually dry. Rather, dead and yellowing grass leaves and stems accumulate, waiting for Mother Nature’s cleaning crew: fire.

In the prairie and steppe environment, every three or four years a grass fire races through in late spring or early summer when the foliage is dry. It’s a relatively low temperature fire that passes too quickly to damage the grasses’ crown, but burns away the accumulating dead foliage, enriching the soil with ash as it does so.

The fire also plays a second role: it wipes out any trees or shrubs that had started to sprout. Thus, the prairie remains a prairie; it doesn’t become a forest. That’s why grasses are used to a cycle in which any cleanup necessary is carried out in the spring.

In our cities, of course, there’s no longer any question of lighting a fire to burn ornamental grasses in the spring! That would be far too dangerous for human structures. Instead, gardeners typically wait for the snow to melt, then cut their grasses back to about 4 to 6 inches (10 to 15 cm) in height. A string trimmer or hedge trimmer will do the job quite nicely. Cut grass stems and leaves make an excellent mulch: you can just lay them on the ground as is or shred them by passing them under a lawn mower or through a chipper/shredder. Or put them out on the roadside for that the municipality to recycle.

So much for grasses whose foliage turns brown in fall, but some grasses, such as blue fescue (Festuca glauca and others), blue oats (Helictotrichon sempervirens) and most sedges (Carex spp.), have evergreen leaves. They retain their color all year around. How do you maintain those?

When a herbaceous plant has evergreen foliage and therefore has leaves that stay green even in fall and winter, that’s like a warning. It’s as if the plant was saying: don’t prune me! These plants prefer to be left alone in the fall. You wouldn’t cut back a conifer, would you? Well, in all logic, you wouldn’t cut back evergreen perennials either. It’s a fairly small group, but contains such plants are periwinkle (Vinca minor), heuchera (Heuchera spp.) or bergenia (Bergenia crassifolia). I hope you don’t cut those back!

Well, don’t cut evergreen grasses back, either. At the most, quickly go over the plant in the spring and pull out any dead leaves or stems if they bother you. If you wear rubber gloves, and pull lightly as you run your fingers through the grass, the leaves tend to stick to them and come free. I suspect, though, that most gardeners find the few dried leaves seen each spring aren’t even worrying over.

So, whether you’re a hard-working gardener or a laidback one, you should really leave your grasses alone this fall. Not only will you enjoy their beauty in the months to come, but they’ll look all that much more beautiful when they regrow next spring.

6 comments on “Ornamental Grasses: No Need for Fall Cleanup”