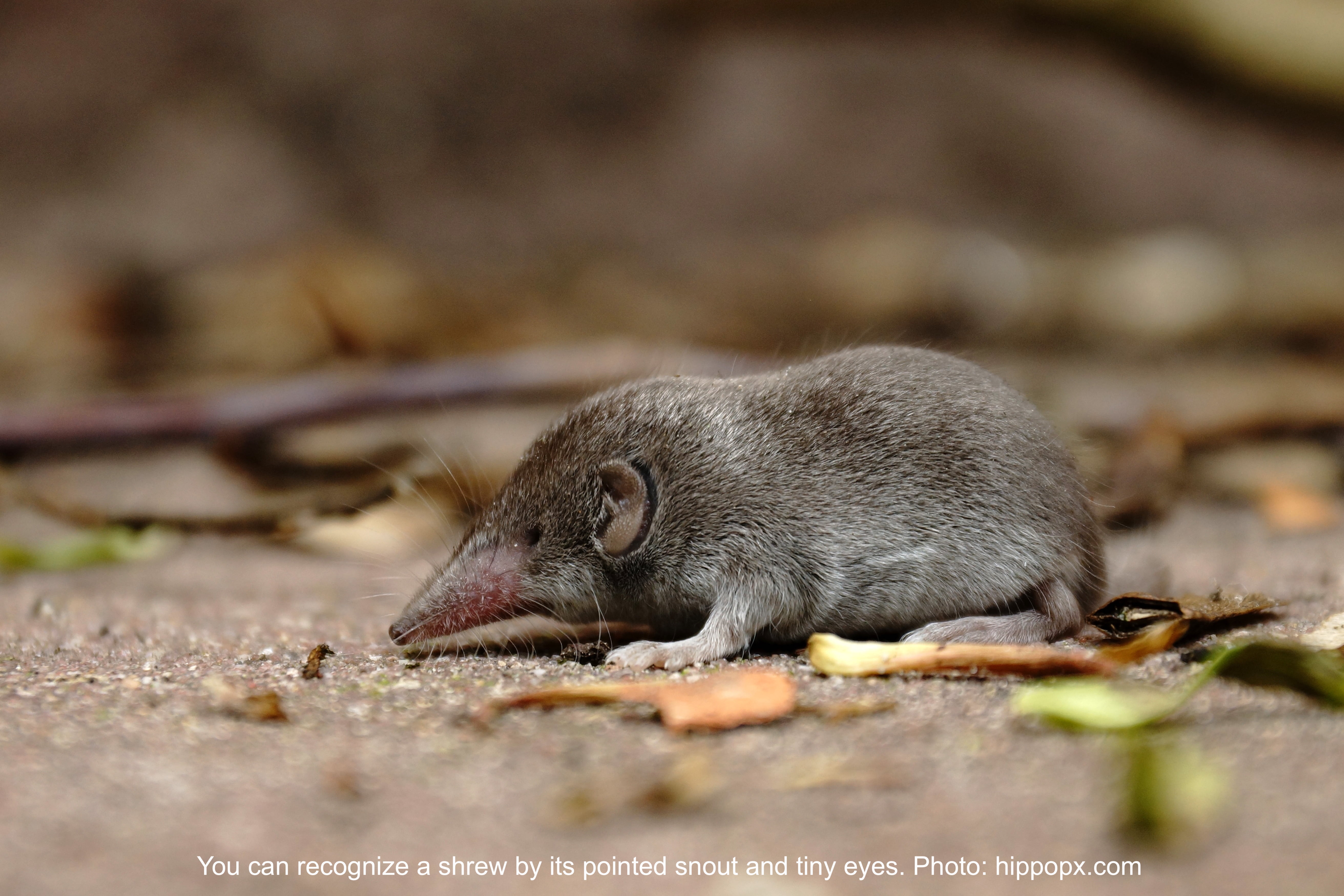 You rarely see them. And no one talks about them. Yet, shrews are among the best friends your garden has.

Sadly, the only shrews I’ve ever seen were dead. One of my cats used to catch them and leave them on the doorstop. Cats won’t eat them, or at least most won’t, because they smell bad, giving off a skunklike musk when captured. I was amazed at the numbers of shrews he caught, not realizing at the time the huge number of shrews that inhabit our environments. One estimate for Great Britain suggests over 50 shrews per hectare in wooded areas. And you find them almost everywhere, even in cities.

Shrews look a lot like mice. They’re tiny (smaller than most mice, rarely more than 3 inches/7.5 cm long) and gray, with itsy-bitsy eyes that don’t see very clearly and small ears. However, their long, pointed snout gives them away. And so do their teeth, should you be examining a dead one. They aren’t rodents (and are there unrelated to mice and rats) and therefore don’t have the pair of long gnawing incisors typical of rodents. Instead, they have small spike-like ones. They’re more closely related to moles, but don’t live constantly underground like moles, although some species do burrow while others may adopt abandoned tunnels left by moles or other burrowing animals. They belong to several different genera, but most found in temperate-climate gardens are in the genera Blarina (short-tailed shrews), Sorex (long-tailed shrews) ou Crocidura (white-toothed shrews).

Most of you know that the word shrew is also used to describe a bad-tempered woman (yes, the term seems to be gender specific). One has to suppose the term comes from the extremely agressive way that shrews attack invaders to their territory, totally beyond anything you might imagine for such a tiny animal. I don’t think the derogatory term shrew is much in use these days. It’s probably being kept artificially alive by Shakespeare’s play The Taming of the Shrew.

There are some 385 species of shrews, found throughout the Northern Hemisphere, Africa and northern South America. They are absent from Australia, New Zealand, Antarctica and many islands. Some are climbing species, others are aquatic, but most are much like the shrews that likely inhabit your garden: they’re terrestrial and live much of their life hidden in leaf litter, small burrows, under trunks and branches and under plants and shrubs.

Though tiny, shrews are very fast, scurrying about furiously with a zigzagging habit. They’re mostly nocturnal, which partly explains why you rarely see them, but they’re also just so wary of humans that they usually keep well out of our way. And when you do see on, it’s mostly as a blur: they’re that quick!

Why Shrews Are Helpful

Although often classified as insectivorous, shrews are actually omnivorous. They’ll eat almost anything their own size or smaller. That includes caterpillars, beetles, grubs, grasshoppers, millipedes, centipedes, other arthropods, slugs, snails, mice, seeds, nuts, pet food and much more. Most are somewhat poisonous (unusual for a mammal), their bite giving off a venom that paralyzes small prey. They can then carry it off and store it in a cache for later eating. Some paralyzed insects remain alive for up to 13 days!

If you’re ever bitten by a shrew (very unlikely), it will hurt and the pain can last for days, but the venom their bite injects is no more serious than that.

Shrews need to eat almost constantly. Their metabolism is off the chart and they need lots of energy to maintain it. Most need to eat between 1/2 to 2 times their own body weight in food daily. That’s a lot … and means a lot of plant enemies fall into their clutches. They’re probably the main reason slugs, a main prey item, don’t empty your garden entirely.

Of course, shrews don’t differentiate between friends and foes of the garden. Yes, they’ll eat pollinators, earthworms, snakes, spiders and even small birds if they can find them, but overall, they’re far more useful to gardeners than harmful.

With such poor eyesight, shrews mostly find their prey through their long mobile whiskers they whisk around constantly as they scurry about. They can tell what they’ve run into—friend or foe, food item or not—by touch alone. They also use scent to guide them and even echolocation (yes, like a bat), but mostly to find their way around. Whiskers are their main hunting tool.

Shrews don’t hibernate exactly, but do enter torpor for a certain period in colder climates. Many species drastically reduce their body weight as winter arrives, even shrinking the size of their skull and brain, thus reducing their need for energy. And when they are active in winter, many largely feed off the items they cached over the fall.

Shrews live fast and die young. Most live only about one or two years. And they reproduce … often. 2 or 3 times a year in colder climates, mostly in the warmer months; up to 10 litters a year for tropical species. After a gestation period of 17 to 32 days, a female shrew will give birth to 2–10 young. The female is often pregnant even as she lactates: when one generation is born, she weans the previous one, pushing it out of her nest to make room for the newcomers.

You may find many shrews in your yard, but there is no “colony.” They’re solitary. They only get together to mate. Each shrew will have its own tiny territory and will defend it vigorously against any interlopers.

Cats are their main predators in urban settings. As mentioned, they’ll catch and kill them, but usually won’t eat them and most mammal predators (foxes, wild cats, etc.) also learn to ignore them. Owls and other birds of prey seem immune to their musky scent and fish often pick them off if they get too near the shore.

How to Maintain a Healthy Shrew Population

I’m hoping that, by this point, you’ve learned that shrews are the gardener’s friend and will be willing to let them be. There is really no reason to want to eliminate them from your garden: they actually help you!

To help maintain a healthy population of shrews, keep your cat indoors and let your garden grow a bit wilder. Mow the lawn higher, leave plant material to decompose on the spot, leave low-hanging branches alone, don’t use poisonous pesticides (insecticidal soap and neem oil are fine, but don’t put out metaldehyde slug and snail bait). Do put out a bird feeder, though. Seeds falling to the ground will help feed the shrew population.

How to Get Rid of Shrews

There are plenty of websites covering this subject, many of them alarmist, making shrews seem like some sort of plague that must be stopped at all costs. I consider controlling shrews to be a bad gardening practice and won’t be encouraging it in this blog.

The one exception is when, and it happens very, very rarely, a shrew (not “many shrews,” remember they’re solitary!) accidentally wanders into your house and is unable to find its way out. It will quickly die there unless you can catch it and move it outdoors quickly. You could use a live catch mousetrap (you could bait it with almost anything edible, since shrews are omnivorous, but crisp bacon, peanut butter or sliced hot dog are said to be particularly good) to try and capture it, but even a regular, spring-loaded mousetrap that would put it out of its misery would be useful if you don’t have rapid access to a live catch one.

Shrews: the garden friend you didn’t even know you had!

15 comments on “The Shrew: Your Garden’s Oft-Ignored Friend!”