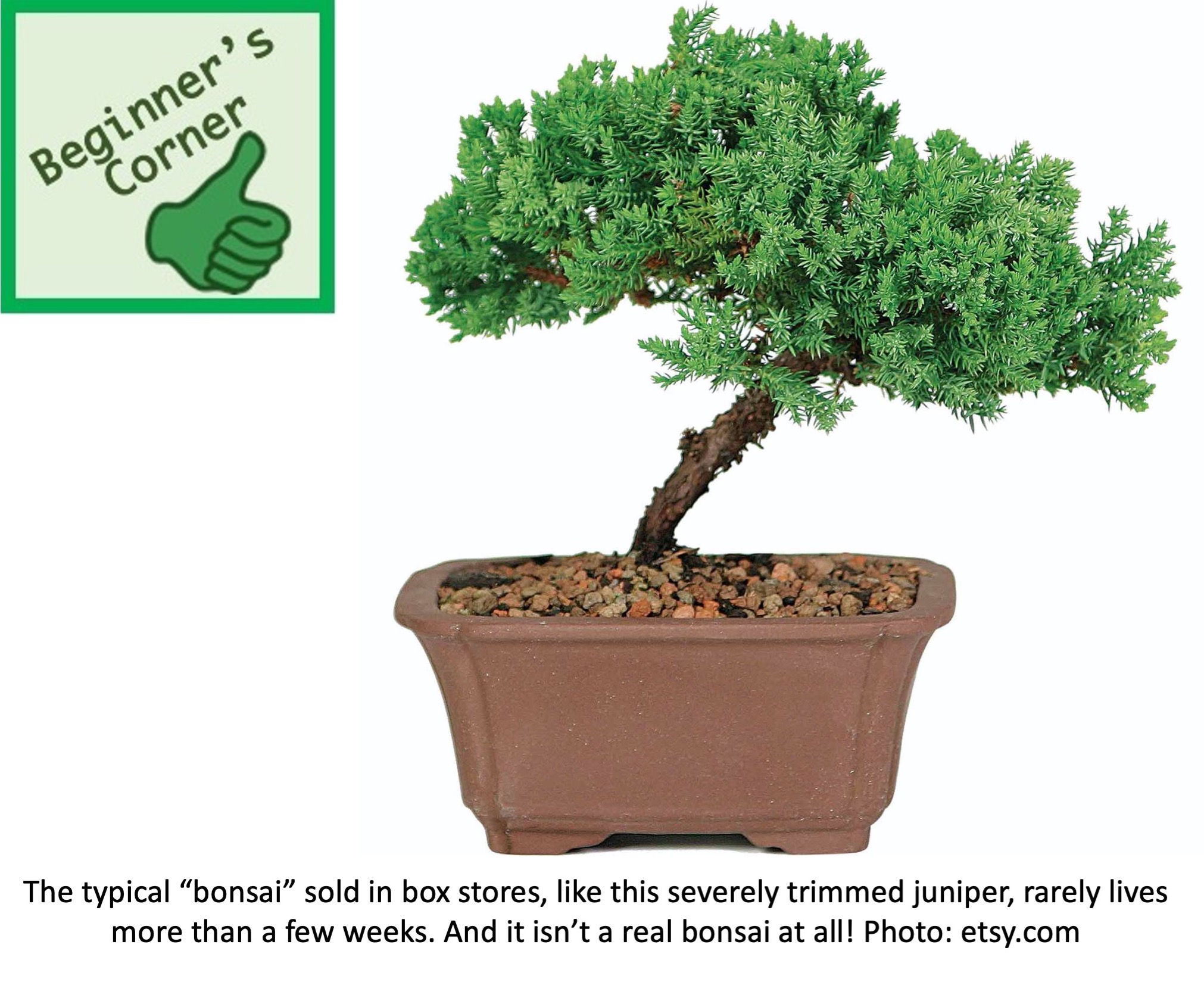 In general, the inexpensive bonsais sold in non-specialized stores are not really bonsais, at least not yet. They are simply small shrubs or conifers roughly pruned and planted in a small Asian-style pot. To the uninitiated, they may look like bonsais, but they don’t confuse experts. Still, you can convert one of these imitation bonsais into a real one with a bit of knowledge and care.

Unfortunately, most of these so-called bonsais die within a few weeks of their purchase due to inadequate care. In particular, many of these plants are outdoor plants that novice bonsai practitioners try to grow indoors: almost a sure way to fail!

So, let’s look what a bonsai really is… and how to grow one.

The History of Bonsai

Although most people correctly associate bonsai with Japan, in fact, the art of bonsai was actually born in China during the Han Dynasty around 200 BCE and was imported to Japan almost a thousand years later, around the 7th or 8th century, under the influence of Buddhism. Moreover, the word “bonsai” (correctly pronounced, “bone-sigh” rather than “bahn-zai”) is the Japanese pronunciation of the Chinese word “penzai.” Originally the word simply meant “plantation in a low pot,” but the art of bonsai has become much more than that.

In modern China, the word now used is “penjing” or potted landscape. In fact, each Asian country has its own form of this technique. From now on this text, I’ll be using the term “bonsai” to describe any type of miniaturized tree grown in a pot using an oriental style, be it from Japan, China, Vietnam, Thailand or elsewhere.

Obviously, the art of bonsai has greatly evolved since its beginnings and a bonsai is no longer just an ordinary plant grown in a pot, but rather a miniature tree or a miniature landscape. Usually, the bonsai artist prunes and wires trees or shrubs, bending and twisting the branches, to give them an appearance of great age. A successful bonsai should make you think of a centuries-old tree, perhaps clinging to a rock or bent by the wind. Bonsais can be thought of as living sculptures. Or a marriage of art and horticulture.

However, it’s wrong to believe that a bonsai is necessarily hundreds of years old.

True enough, there are very old bonsais, but the vast majority of bonsai are much younger than that. You’ll mainly see hundred-year-old-plus specimens in public gardens, many of which have very interesting collections. However, very few bonsais in private collections outside of Asia are more than 50 years old.

A good place to see more modern bonsais is in one of the many bonsai shows held annually all over the world: you’ll be able to see what local gardeners are doing. You’ll soon discover that many of the most beautifully formed bonsais are only four or five years old!

If you think bonsais are houseplants, though, think again. This belief comes from the fact we usually see bonsais on display indoors in shows and other exhibitions. However, after the show, the vast majority return to their natural habitat: the outdoors. Many in fact are created from cold-hardy trees and must be wintered outside, albeit sheltered from the worst weather (often inside a structure of some sort or wrapped in geotextile). And almost all spend at least the summer outdoors.

Only bonsai created from tropical and subtropical plants, such as Ficus, Serissa, Podocarpus and subtropical azaleas (Rhododendron spp.) actually spend their winters indoors and can be considered true houseplants.

There are different styles of bonsai: formal upright, informal upright, slant-style, cascade-style and much more. They are also found in different sizes. Miniature ones are no more than 10 inches (25 cm) in height and require plants with naturally tiny leaves to create a satisfactory effect. The very largest ones can be over 6 feet (2 m) high. One popular size is the omono or four-handed bonsai, the implication being it takes four hands (i.e., two people) to carry it. Many of the older bonsais seen in public gardens are omonos.

Some bonsais are handed down from generation to generation in the same family, notably in Asia. In other countries, they may still survive generations, but are generally sold or donated when the original owner can no longer take care of them.

The average modern bonsai was chosen from nursery stock, then shaped to conform to recognized standards, although others may be started from cuttings or even seed.

The oldest tradition is harvesting from the wild plants that are already naturally bent and twisted by extreme growing conditions, such as on a cliff or mountain. This is still done, but beware: don’t go digging up plants without the permission of the terrain’s owners (otherwise it will be considered theft) nor without proper preparation. You may need to prepare the plant in situ for a year or two, pruning the roots first on one side, then the other, before daring to cut it free from its surroundings and move it into a pot.

Can Anyone Grow a Bonsai?

Yes, if you’re patient and willing to invest a reasonable amount of time and effort.

Bonsais require careful maintenance, restricted as they are to small pots and subject to regular root pruning. They especially require close monitoring of their watering. Not that you need to drown them with daily watering, but do check them at least two or three times a week.

To make a comparison, they require more care than a typical foliage plant, but less than a pet dog or canary.

And if you go on vacation, you can’t just trust them to your next-door neighbor. Instead, use the services of a bonsai babysitter (and no, I’m not making that up!). Check your local bonsai society or bonsai store for names and coordinates.

You recently bought a bonsai and want to know how to keep it going? I suggest you join a bonsai society and follow their courses and demonstrations. There are many of them all over the world… probably one not that far from where you live. If there is a local bonsai shop, it too will most likely offer courses.

You can’t attend a course? It’s also possible to learn the art of bonsai from a book. There are many good bonsai books around, but make sure you’re getting a how-to book, at least to start. The coffee table types, with their superb photos, may give you plenty of ideas for bonsai styles and pots, but they are rarely of much use when it comes to actually creating or maintaining a bonsai.

As you can see, you can’t just become a bonsai artist overnight. Instead, it’s a slow but fascinating apprenticeship that can take years.

Good luck with your bonsais!

3 comments on “A Beginner’s Guide to Bonsai”